A 25-year-old Uyghur jihadist terrorist from Xinjiang, an Islamist hotbed region in western China, is the prime suspect behind a massive bombing in Bangkok’s Erawan Shrine on August 17, Thai authorities have said. It should be noted that they use the islamic meaning for the term, ‘innocent’ meaning muslim. No non-muslim is ever innocent as they do not believe in the holy napkin or whatever it is, and no muslim can be anything but innocent as his belief in islam makes him an innocent by tardish reasoning. 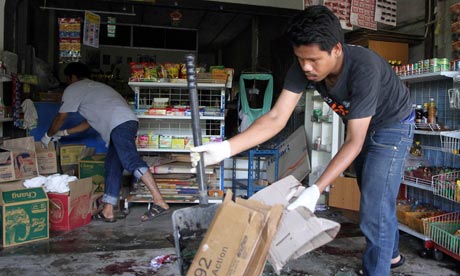 Four gunmen on motorcycles pulled up at the store in Pattani province, 500 metres from a military checkpoint, on Wednesday. “The attackers sprayed the shop with bullets before going in to finish off their victims. They left a note saying ‘revenge for the innocent’ before fleeing the scene,” said a police officer in Pattani.

As as vivid indication of their commitment to peace, the Islamic jihadists murdered three Thai soldiers just as the peace talks began.

“We share the same goal, which is to reduce violence in the region. Both sides have agreed that we want peace in the area,” Paradorn told reporters after a daylong meeting facilitated by Malaysia.

The rangers were ambushed while traveling in a pick-up truck on Monday in Pattani province in the Muslim-majority border region, where an eight-year conflict has claimed thousands of lives.

On the same day, four Buddhist rubber tappers died on their way to work in two separate gun attacks in Pattani, while a pair of Muslim men were killed in a drive-by shooting in neighboring Yala province, police said.

Two vegetable vendors were also shot dead in Songkhla province, which had been relatively untouched by the violence until a number of attacks this year, including a series of car bombs in April that left 15 people dead.

102 separatist incidents in the deep South

Col Pramote said bombs and suspicious objects were planted in many areas, and insurgents were thought to be to blame. Thai flags were also burned and Malaysian flags hoisted to mark the 55th anniversary of the founding of the Bersatu separatist movement, an umbrella group active in the far South, and Malaysia’s National Day, Aug 31.

There were 44 incidents in eight districts of Narathiwat, 34 in Yala’s Muang, Yaha and Bannang Sata districts, 12 in Pattani’s Muang and Yarang districts, and another 12 in southern Songkhla.

Security officers were able to dismantle most of the bombs, but six soldiers were injured by explosions in different areas of Narathiwat this morning, he said.

“We believe the culprits wanted the incidents to make headlines and they chose to act on Aug 31, which coincides with the national day of Malaysia and the anniversary of the Bersatu’s establishment,” Col Pramote said. “They [the insurgents] wanted to arouse their followers in the region.”

He said the insurgents were trying to generate hatred and distrust between the people of the two neighbouring countries by burning Thai flags and raising Malaysian flags.

However, Thailand and Malaysia will continue to have a good relationship and these incidents will not cause  conflict, he added. 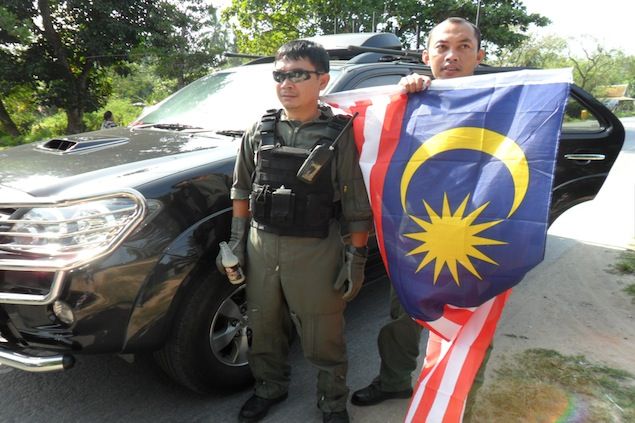 Well we already know how the Organization of Islamic Cooperation is using the UN to destroy freedom of speech, most importantly the freedom to criticize, and be free from, irrational religious authority, specifically Islamic through the Istanbul process.

But how more directly?

Well. Let’s say that Muslims had an ongoing campaign of murder, terror and tactical attacks against a neighboring non-Muslim area or nation. Lets say that they were slowly gaining ground and forcing out the indigenous people, or subjugating them to Islamic will and laws. Then I would make sure the UN did not see this as a conflict that required their attention and make sure it continued. However once the Islamic forces made some real headway and had established themselves to a degree and once the locals finally figured that the cost of fighting back was lower than the cost of doing nothing or waiting for authority, even the perceived costs, then I would insist that the UN step in and guarantee the new Islamic dominance of that area.

Anyway just some idle thoughts about what I would do if I ran the OIC.

South ‘may be lost if UN intervenes’, army general warns

Thailand might lose the deep South if the United Nations is allowed to intervene and help end the violence in the region, deputy army chief Daopong Rattanasuban said on Friday.

“We have not lost our land yet, but if we’re complacent and let the UN intervene and hold a referendum, then we’re finished,” Gen Daopong said.

“We won’t let this happen and we’ll fight it to the death, but our Muslim brothers and sisters have to understand us because we’re fighting against a small percentage of people who are using guerrilla warfare tactics.” The insurgents wanted to get villagers on their side by telling them that the government and Thai Buddhists are evil, discriminating and unjust and that officials are using excessive force, he said.

However, 90 per cent of the two million Thai Muslims were well aware of the situation.

The problem in the South was sensitive because it involves religion. Officials needed to be patient and have a good understanding. Fortunately, Thai Muslims understand and the army is trying to gain their trust, he said.

The southern militants, after failing to mislead the villagers, tried to instill fear by setting off bombs and murdering security officers at random, he said.

Thanks Don L for all the great links. I have come to realize from watching the video below, that Islam really is the religion of peace. Because if we could just get rid of Islam, the world would know peace.

From The Daily Star:

Video footage of the attack in Pattani province was captured by surveillance cameras that authorities have installed throughout Thailand’s three southernmost provinces, where an Islamist insurgency that erupted in 2004 has claimed more than 5,000 lives.

The footage shows pickup trucks tailing a pair of motorbikes that soldiers were riding as they returned from a military patrol to their base.

As the trucks pulled up alongside the motorbikes, armed men opened fire on the soldiers at close range and shot them dead. They then stole their victims’ rifles, which they used to fire at another oncoming security vehicle before fleeing.

Police Col. Kong-att Suwannakha said three motorbikes were attacked in total, each carrying two soldiers. Police were looking for about 15 suspects in connection with the attack but had made no arrests.

The shooting is among several attacks by suspected militants since the Islamic holy month of Ramadan began last week.

A roadside bomb on Wednesday in nearby Yala province killed 5 policemen.

The three southern provinces of Pattani, Yala and Narathiwat are the only Muslim-dominated provinces in the largely Buddhist country.

The real story is how ABC’s headline is about bombs going off but the entire 2 page article is nothing more than a puff piece on the wonders and magic of peaceful happy joy joy Ramadan and how hard it is to calculate the start and how its all about fasting, piety and good deeds. ABC is disgusting.

Below, is a much more accurate and dare I say even academic analysis of Ramadan:

Millions of Muslims began fasting Friday at the start of the holy month of Ramadan in Indonesia and Thailand, where the somber occasion was marred by two bomb blasts that killed one person and injured seven, officials said.

The Muhammadiyah group, Indonesia’s second-largest Muslim organization, told its 30 million followers that Ramadan starts Friday. The government, however, declared the official start as Saturday when most of the remaining 190 million Indonesians will begin the annual dawn-to-dusk fasting for a month.

Muslims in the Buddhist dominated Thailand also began Ramadan on Friday, while India, Pakistan, Malaysia and Bangladesh will start Saturday or Sunday.

Quite a day for the ol’ mustards. Lots of death, suffering and horror all around. Mohamed would be so proud.

Buddhism is in fact the religion of peace. So much so that it is a wonder that it exists at all, as when it is attacked, it typically folds like a cheap suit. Tibet springs lightly to mind. 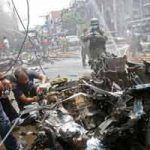