On April 24, 2020, I tweeted out one of my favorite examples of Media, social or otherwise, memory-holing inconvenient acts by leftists.

It was the video we made of the events of April 28, 2009 which is set to auto-publish here on that date. But I will post it again now because of the story I am about to tell:

(Readers of this site will see this video again on the morning of April 28th.)

Within minutes of tweeting it out, there was a retweet or two and a comment or two and then activity on the tweet stopped. I assumed, stupidly, that there just ins’t that much interest in that event. 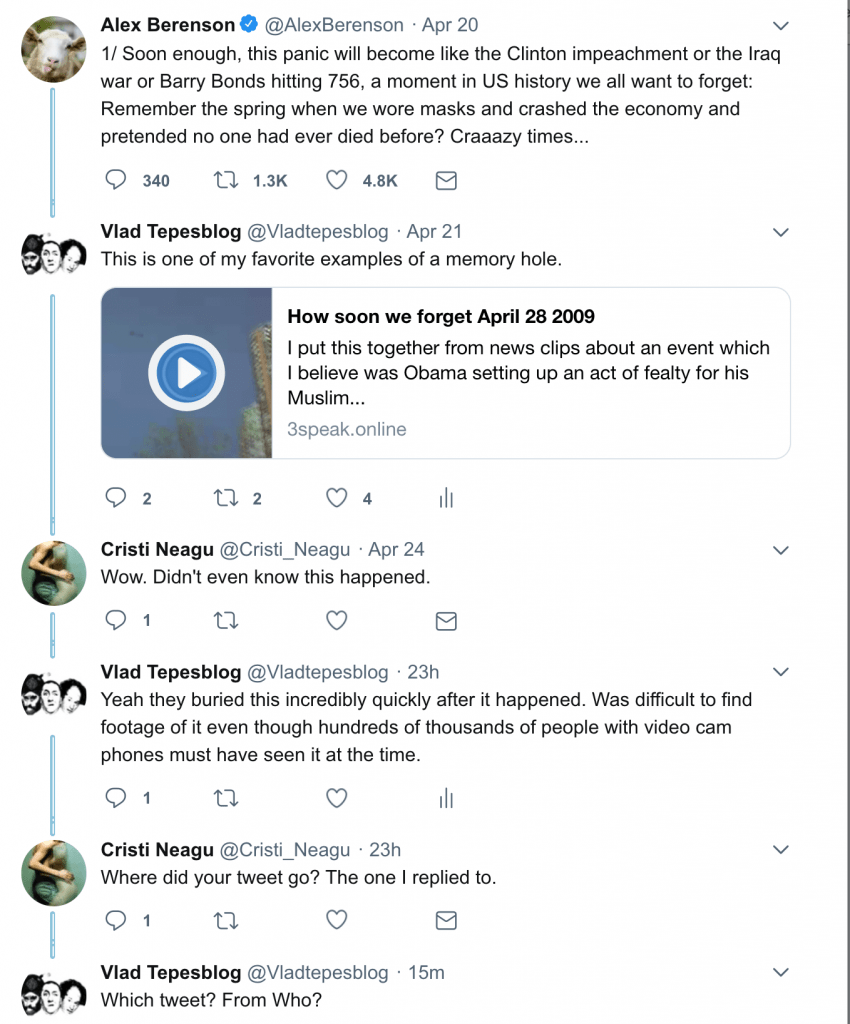 Then this morning, someone asked what happened to the tweet? The thread was there, but not the video. See Cristi’s tweet of 23 Hours ago above. Notice that in the image posted above you can see the tweet. That is from my timeline right now. But others sent me screen grabs of their timeline: 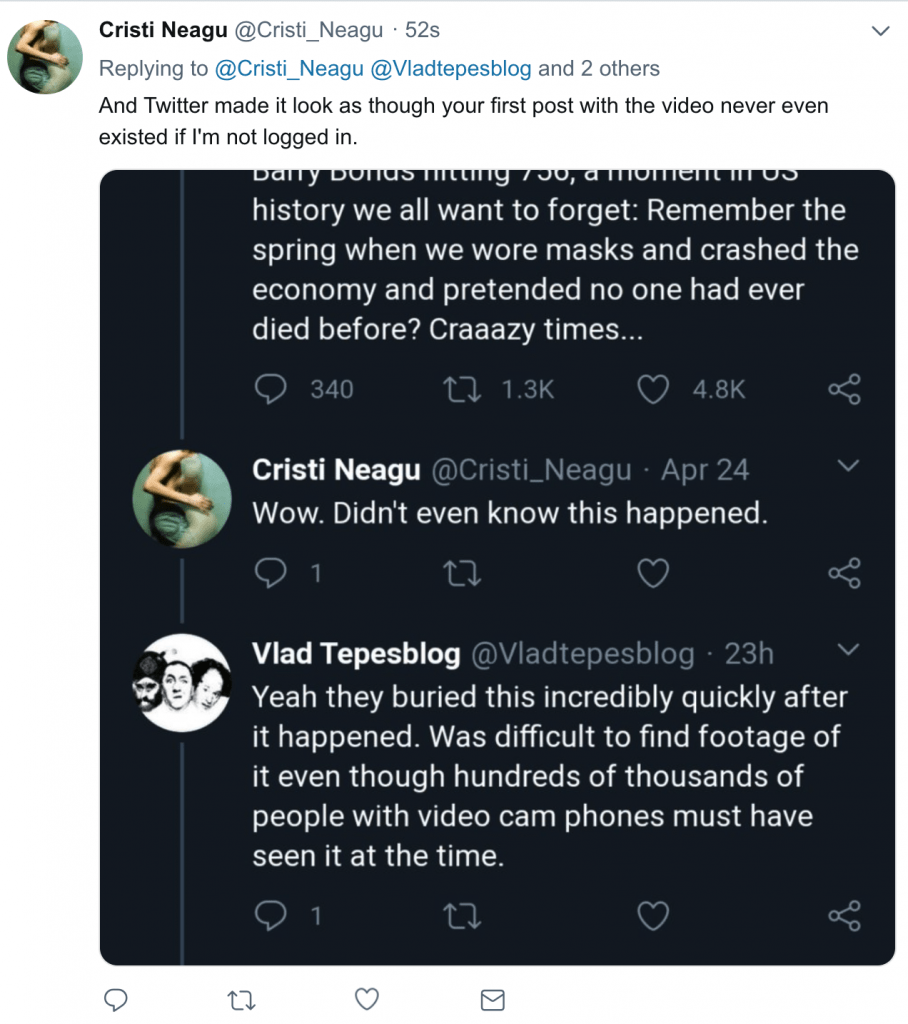 Twitter just removed my tweet with the video that said nearly nothing in the tweet itself other than it was my favorite example of a memory hole event.

Clearly I understated and underestimated the power of media to memory hole things they do not want the public to know.

For those of you that find this to be as egregious an affront to our most basic liberties, not just freedom of speech, but freedom to remember actual events as they happened at the time, even if they made a Democrat-COMINTERN member look bad, you may want to tweet the link to this video out there. Here is the link:

Those of you who follow European politics might have heard about the “far right wing racist” guy who shot up a club killing many Kurdish people for some reason.

While this atrocity remains an atrocity, we did not publish anything about it because we spotted the pattern of Merkel and the leftist government media complex either using or even ORCHESTRATING events in order to demonize, marginalize and now, even an attempt to criminalize the classically liberal, AfD party. It is freakish how these events happen before regional elections and also no surprise at this point how the event is used.

We saw it first in Chemnitz which was busted by Merkel’s own director of Intel, who was then moved to another portfolio right away. He would have been fired if not for the coalition partner who made sure he got an even better job, but outside of Intel.

There have been other instances, but the next one that seems clear was the abuse of an event where a nutty fellow who was not even right wing, went and attempted an attack on a small city Synagogue which failed but he killed two unrelated persons in the process. All information on this attack was banned and controlled just as was this new case. Manifestos and videos taken off line and especially in Germany as the facts and motives were reformatted to fit Merkel’s Neo-Marxist narrative.

We did not want to publish anything while the Neo-Marxist machine had control of the narrative.

Information about the killer of the Kurds is now beginning to seep out here and there and now it has become worth posting about. Here is the first couple of items stitched together into one video:

The woman in the second video is co-chair of Germany’s federal AfD.

September 2018 saw a very interesting and revealing series of events centring around the German town of Chemnitz.

A German girl was horribly murdered by a muslim migrant and the townsfolk had had enough and began to protest.

In point form, the Merkel government wanted to put a fast stop to that as it looked like it may pick up momentum and spread to the extent that it would interfere with her population replacement program.

A video started circulating that was edited at suspicious points, which claimed that the locals had been “hunting migrants”.

An investigation was launched.

The chief of intelligence for Germany determined that the video was made by ANTIFA, had been deceptively edited and there was no truth at all in the claim, which had been sweeping German news, that Chemnitz residents had been hunting migrants as revenge for the murder of the German girl. One of many who had been raped and murdered in 2018 in Germany by illegal muslim migrants.

Shortly after his presser where he revealed this, he was fired and moved to another more out of the way position within the German bureaucracy.

Below are all the videos I can find that we did on that event more or less in the order that we did them. This was a major event and while it was scrubbed from Youtube, it must not be lost altogether.

August 28, 2018: Interviews with people on the street at the demonstrations for the murdered girl:

September 5, 2018: Arab in Chemnitz interviewed about his feelings on the events in Chemnitz and the German people:

September 8, 2018: “Nazi” in crowd of protestors was actually a communist activist:

September 19, 2018: This is a TV piece doen subsequent to the firing of German Security Chief, for telling the truth about what happened in Chemnitz.

September 30, 2018: Leftist news report about what happened in Chemnitz:

1. The name of the truck driver in Scotland who killed something like 6 people when his truck drove at top speed down a busy shopping district and slammed into a wall still has not been released and curiously no witnesses have come forward and described him or the scene that I am aware of and the names of the other 2 on the truck have also not been released and the authorities are saying that they never ever will.

2. The massive explosion in Greely ontario this fall that literally flattened 2 buildings and left just a metal frame of a barn, a 3rd building has not been updated since about 48 hours after it happened on October 9 when police said that it was not a meth lab or a grow op. They started referring to it as a ‘fire’ however but have not stated the cause. The explosion could be heard over 25 kilometers away. This would be the loudest fire in human history.

3. No new information on the building that exploded in Minneapolis USA over a year ago now which was said to be a gas explosion even after the gas company quite vociferously said it was not and gave evidence to the media showing it could not have been, in true Men in Black fashion, was demolished within a day or so of the event by Homeland Security so that the investigation could never take place even though local authorities had made it clear that the ruins would not be touched for weeks in order to figure out what happened.

Given that Hizb’allah has a great deal of crime and legal operations to raise money for terrorism and operations for Islamic supremacy in North America. Drug smuggling being a main source of revenue, what ever happened to this Iranian family? Why can I not find any reference to them after May 18 2012?

A muslim man gets stuck naked in a pipe in a secure area (apparently not so secure) of a major water treatment plant for drinking water in New Jersey. He is taken in for questioning. He is known to have climbed a wall and three layers of barbed wire and slithered into a pipe seemingly to gain entrance to the plant.

3. Jan. 1 2014: Muslim building blows up in the US, DHS actually destroys the evidence.

Gates of Vienna is often posting new analysis and whatever they can find about this most curious and most Orwellian handling of a major event. But no new actual information has been released to the public at all.

4. May 14 2013: Seven caught Trespassing At Quabbin Reservoir; Patrols Stepped Up Across State

Anyone see any followup to this at all anywhere?

5. July 14 2013: NYC Muslim cabbie kills 1 passenger in knife attack and beat another with a baseball bat.

Try googling for any more information than the day after it happened.

There are many many more events like this that seem to be somehow, memory mismanaged, or perhaps ‘handled’ might be more accurate. It is important we do not let them disappear.