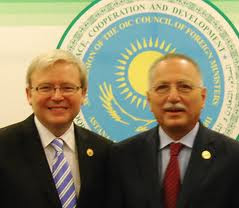 Media Release from the Q Society:

Australians to be healed from ‘Islamophobia’ by head of global Islamic organisation
Sunday, February 12, 2012 – Q Society of Australia Inc.

This week Foreign Minister Kevin Rudd has invited Professor Ekmelledin Ihsanoglu[sic], the Secretary General of the Organisation of Islamic Cooperation (OIC), to discuss “Transition and Change: The OIC and the Islamic World”

Events take place on February 15th and 16th at the National Press Club of Australia and at Griffith University, Brisbane. Following similar events in Europe and Washington, Mr Rudd’s visitor is here to educate and help us overcome “Islamophobia” in Australia.

The OIC, which represents 56 Islamic states, makes up the largest voting bloc of the UN.

United in their effort to limit critical discussion of the Islamic religion and sharia law, these countries refuse to sign the UN’s Universal Declaration of Human Rights. OIC members construed the ‘Cairo Declaration’, in which human rights are subject to interpretation by Islamic clergy and sharia law. The OIC is headquartered in Saudi Arabia, a feudal monarchy renown for violation of basic human rights under strict sharia law.

The feigned concern of the OIC with discrimination against Islam and more notably views not supportive of Islam is in contrast to the violent intolerance experienced by non-Muslim minorities in many Islamic countries. Indigenous religious minorities, which are not afforded the same respect, recognition or equality demanded by the OIC for Muslim immigrants in the West.

Author and human rights activist Ayan Hirsi Ali ‘s recent article ‘The Global War on Christians in the Muslim World’ highlights “… an unrecognised battle costing thousands of lives.” With these facts in mind, there are serious questions democratic governments should be asking the OIC, before taking advice from Professor Ihsanoglu.

Q Society appeals to Mr Rudd to show courage and openly address this discrepancy and the discrimination against non-Muslims, evident in almost every OIC country.

Vilifying critics of Islam and sharia practices as ‘islamophobic’ is in fact aiding and abetting those who seek to silence the debate about the rise of Islamic sharia, both in the West and in the once secular countries of the OIC.

Kevin Rudd, our erstwhile Prime Minister and current Foreign Minister, has a bit of a reputation as a grandstander. The current view is that he’s bucking for a seat with the UN (Security Council, no less – even temporary is good to this fellow), and a part of his sleazing towards that goal is sucking up to the OIC.

He’s given a lot of money to help the less fortunate in countries other than Oz, which you’d expect as Foreign Minister. But…

It appears that Kevin747 and the “good” Professor go way back to at least a year ago:

Both sides had useful and extensive exchange of views on the international and regional issues of common interest. In particular, they discussed the OIC-Australia relations, Middle East Peace Process, latest developments in Libya, rising phenomenon of Islamophobia and interfaith dialogue.

At the end of the audience, H. E. Mr. Kevin Rudd has invited H. E. Prof. Ekmeleddin Ihsanoglu to visit Australia at a mutually convenient time to further discuss the issues of common interest.

Common interest being things like, say, providing the OIC with its very own special envoy.

JEDDAH,15 Rabi al-Awwal/7 Feb.(IINA)-The Secretary General of the Organization of Islamic Cooperation (OIC), Prof. Ekmeleddin Ihsanoglu will lead a high level delegation in his official visit to Australia starting next Sunday, 11 February 2012. Ihsanoglu is set to visit a number of cities where he will meet with the Australian Minister of Foreign Affairs, the Hon. Kevin Rudd MP, with whom he will discuss bilateral relations and ways of enhancing cooperation between the OIC Member States and Australia through the OIC and will sign a memorandum of cooperation between the OIC with Australia.

Informed sources from the OIC indicated that the Secretary General’s visit will open up new prospects for cooperation with more Western countries, noting that the visit, which is the first of its kind of an OIC Secretary General to Australia, comes after a number of official visits made by Ihsanoglu to western capitals during the past two years, most notably of which were London, Bonn and Washington, where he met with the U.S. President.

The sources added that the OIC accords special importance to forming now relations of great impact that contribute to international efforts of the OIC in various fields, especially those related to its activities at the United Nations or the UN Human Rights Council as well as on the issue of Islamophobia, indicating that the Secretary General’s visit to China in summer of 2010 confirmed the OIC’s concern to fostering constructive political relations with effective actors in the world.

The sources also pointed out that the OIC Secretary General will focus in his tour in Australia, which will include Sydney, Canberra, Brisbane and Melbourne, on the phenomenon of Islamophobia, in light of the existence of about half a million Muslims in this country who come from two hundred backgrounds and cultures.

I guess Kevni is quite the man for this job, given his recent whitewashing of several hundred years of history.

He is a toady, a lickspittle and a conniving wannabe Emperor who would sell his country out for a seat amongst the jackals, pandering to a small minority of the population.

I wonder when treason will be back on the books?

All this from the man who once scored an entry onto the blog Men Who Look Like Old Lesbians. 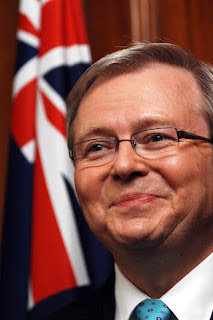 2 Replies to “Failed PM To Sign Us Up With The OIC.”