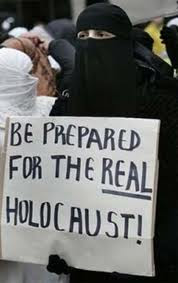 I get asked why I blog, why I talk to people and why I continually wade through the muck of modern decay.

I get asked why I put up with being called all sorts of names. After all, it can’t be pleasant, and it’s far from a delightful way to spend the day.

Why not let someone else make waves (not that I do much wavemaking – more like the occaional miniscule ripple). 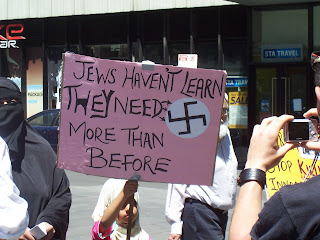 My photo from a couple of years back made it into the papers again last week, with the comment,

Islamic Council of Victoria spokeswoman Sherene Hassan said Muslims were outraged by the placard and strongly condemned it at the time.

“These kinds of messages of hate are appalling and the fact that a child was involved makes it even more contemptible,” she said.

Actually, Sherene, no they weren’t and no they didn’t. It was a lass flogging some socialist rag who got the woman to take it down. I was too busy going for the police. In a situation like that, I’m the Enemy, and it could have gotten real nasty real quick. Better to let the Law deal with it.

Kudos to the unknown young woman, though.

As for a child being involved, that’s no big deal.

How about this for size?

We have the fellow at 1.58 shouting ‘Death to you, by Allah,’ followed by a bit of praise to Bin Laden, and then the usual calls for bombings, and death, and taking your wives as war booty (yes, he really does say that).

Oh, and remember the Khayber. Not that anyone ever knew who they were before 9/11.

Watch carefully, because at 3.29 you’ll see someone’s brought his little tacker along. I guess you could call that a teachable moment.

The decorous young muslima at 3.25 shows a remarkable amount of tolerance with her cries of ‘go back to the ovens!’

I wonder if she truly understands what she’s demanding? An old saying springs to mind: be careful what you wish for.