Once again I noticed riding the buss, that so many young people wear a keffiyeh as a fashion statement or just as likely as a political one. OK that’s fine. I am all for freedom of speech and especially for political speech, the kind that really matters. However I do think it is a good idea for people to actually be clear on what their speech and symbols really mean. today, I saw an attractive young woman wearing as a scarf, the official headdress of the Kingdom of Saudi Arabia. 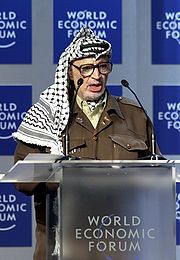 Does she have no clue that the Saudis in all probability would not let her wear it at all within the KSA? That she likely would not be able to travel un-escorted on the street or on a public bus with men on it? That in fact she is wearing the very symbol of one of the most oppressive regimes for women’s rights in the world now or ever? You would  have to be sacrificed to a volcano to get much worse treatment as a woman than you do in Saudi Arabia.

And the rest of the children who have been led to believe that supporting Hamas and wearing the keffiyeh is a cool counter-culture, anti-corporate, death to capitalism, anti racism sort of statement I profoundly hope you will read the Hamas charter as well as Hizbolah’s. They are online and quite clear. These organizations are literally genocidal. Hamas and Hizbolah are the most racist large scale governmental organizations since Hitler’s National Socialists.

So by all means, preach death to Jews and demand that Canada adopt sharia law and take away women’s rights to choice about pretty much anything, and demand a caliphate here in Canada and for the world if you feel that is what you want to see. But for the love of (insert gods here) do not advertise your semi-literate, under-informed, fashion-based crapioca on the rest of us when in fact you have no actual clue what the symbols you wear mean, and the groups you support actually fight for with your support and probably your money. If you are a genocidal anti-semite   and want a seventh century religious conservative rule with zero tolerance for all alternative lifestyles or points of view carry on. I will fight you in the streets and on the beeches as needs be. But if you don’t want these things, go home and change.

Eeyore for Vlad with a nod to Fred at GAR

One Reply to “Of college girls and Keffiyehs”