I have avoided blogging this for the day despite having had links to videos and articles since early this morning. However, early reports were that these riots are somehow connected to the results of a soccer game, Egypt beats Algeria or something like that. My impulse was to blog about how Muslims at least in one way integrate nicely into European culture. They riot over the results of soccer games. However more and newer information is coming in that seems to indicate that while soccer may be the catalyst for these riots, the real motive and desired result is distinctly political and likely jihad. After all, the numbers of Muslims in France now make the hijra nearly large enough to move to a pretty much full time jihad phase of the establishment of the dominance of Islam.

Here is one of several videos. I will post more information as I get it here in this post.

1:19 AM Nov 16 The Snaphanen blog in Denmark has a reference to hunting white people in full quotes. Information is still a little fuzzy but it appears that the Paris riots were motivated by a publicity stunt by a Belgiun company, that was planning to give away 40,000 Euros. When they saw the massive turn out, they cancelled. People went wild in the streets and there was talk of “Hunting White People”. Go to the blog and use your google translator. For those of you with Flock or Firefox, I recommend Foxlingo, a free plug in that allows rapid and quite good machine translations for many languages.

More here at the Gates of Vienna:

8:00 PM Some information seems to indicate that the riots in Paris are not motivated by the same things as Marseilles. 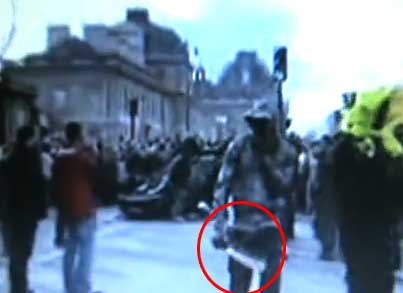 Everyone needs one of these at a soccer game

Thanks to Steen, Gates of Vienna and KitmanTV for much you see and will see here as well as others.