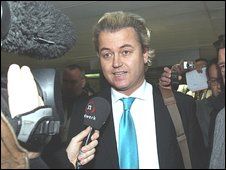 The Asylum and Immigration Tribunal ruling overturned a government decision that led to Mr Wilders being turned back at Heathrow in February.

He will not be showing his controversial film Fitna on this visit but plans to return to show it later.

The Home Office said it would decide in “due course” whether to appeal.

If it does appeal it would need the permission of the Court of Appeal to keep the travel ban in place pending the hearing.

Speaking on the Victoria Derbyshire show on Radio 5 live, Mr Wilders said he was invited to the House of Lords by Lord Pearson to organise the showing of his film at a later date.

“It’s a short visit, not to show Fitna or have a debate, we will have that later,” he said.

What a joke. The home office is afraid Muslims will go nuts and burn and loot the way they always do. They are afraid of Muslim and UAF violence and nothing else. They were afraid thier Muslim friends might prove Mr. Wilders correct in his opinion of Mo’s Minions.  If indigenous Britons were as prone to violence as Muslims then the video of 150 year old Christian graves being bulldozed by Muslims should have led to riots and bloodshed. Not that British media reported it but the video is on more than one you tube site.

He said he wanted to come to the UK to debate the issue with people who both agreed and disagreed with him.

“I believe it was a good day yesterday for the freedom of speech. I believe the decision of the UK government was political, it was not based on law,” he said.

“Never – and I have been to many countries and had this debate – has anything violent happened. And I’m a democratic politician and I only use democratic means like speeches. This is the way it works in civil society.

Following the tribunal’s decision, a Home Office spokesman said: “We are disappointed by the court’s decision. The government opposes extremism in all its forms.

“The decision to refuse Wilders admission was taken on the basis that his presence could have inflamed tensions between our communities and have led to inter-faith violence. We still maintain this view.”