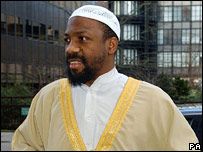 LONDON: Extremists linked to the al-Qaida have claimed that home-grown terrorists are plotting “spectacular attacks” in Britain, a news report said on Monday.

According to reports, the al-Qaida militants have labeled Britain and Europe as a bigger enemy than the United States in an internet magazine favoured by the extremists.

The website, promoted by supporters of extremist cleric Abdullah al-Faisal [another convert to the religion of death] who was deported from Britain after serving a jail sentence for inciting violence, warns of “spectacular attacks”, The Sun reported today.

The British tabloid said the strikes are being planned by terrorists living in Britain in coordination with others overseas.

Security experts in the UK have warned repeatedly that al-Qaida inspired home-grown terrorism is the number one challenge for Britain. Gordon Brown continues to ignore the warnings

A recent report has called for reform of the Joint Intelligence Committee (JIC) to allow an expert on ‘home-grown’ terrorism to sit on the top security panel and to be consulted when assessing potential security risks.

Prime Minister Gordon Brown had earlier underlined that most of the terrorist plots that took place in Britain had their links Pakistan and Afghanistan, where the al-Qaida and Taliban militants have been fighting the US-led Nato forces.

“Three-quarters of the terrorist plots that hit Britain derive from Pakistan and Afghanistan and it is to make Britain safe and the rest of the world safe that we must make sure we honour our commitment to maintain a stable Afghanistan,” Brown said.

One Reply to “Al-Qaida plotting ‘spectacular attacks’ in UK: Report”