There is a great deal of work to do today. Hopefully over the next 48 hours or so, it will all appear here, and or at RAIR Foundation. Some good news for the moment though, the Mastodon Pod is up and working again. A special thanks to the tech people that put the effort in to make that happen. I know it was a lot of work after it came down.

Meanwhile, enjoy this very short but wonderful clip of Dr. Peter McCullough talking about how one of his live audiences reacted to a photo of the Canadian truckers in the Convoy:

The full interview can be seen here. 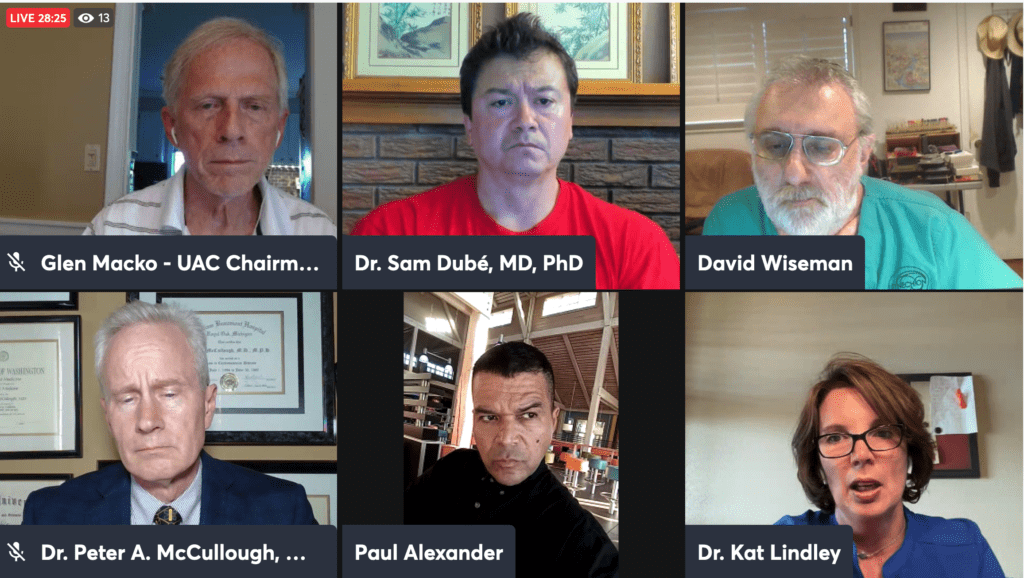 1. Peter McCullough: The vaccine accelerates death from other causes, insurance companies are seeing the results

"Basically, it's achieving its goal. If the goal was to reduce the world's population, it's working." pic.twitter.com/gI3T8NFjYe

2. UK today: how come? most people are vaccinated and most boosted (3rd shot) especially seniors; so how come? is it vaccinal Abs subverting INNATE Abs from eliminating virus? damaging immune system?

We argued one year ago that the vaccinal antibodies (Abs) are sub-optimal and will damage the immune system (acquired and innate) and I am afraid we may be seeing this now. We need to stop these Pfizer vaccines, Moderna etc. Stop them. I argue it is the vaccine that is causing the rise in infections and thus hospitalization and subsequent deaths.

3. A little spoof on fanatical support of the war in Ukraine

(Right or wrong, this video wouldn’t exist without the clear and excessive media narrative pushing one side of this thing without even acknowledging the other. Rewatching the documentary on Robert McNamara, the secretary of defence under Kennedy, he explains that empathy with the enemy is critical to winning a war. Winning of course also means not fighting it when there is a way to solve an issue without fighting a war. This presumably means at least acknowledging their grievances.)

5. This woman (i guess) should make an excellent Supreme Court Justice.

SEN. BLACKBURN: "Can you provide a definition of the word 'woman'?"

JACKSON: "I'm not a biologist" pic.twitter.com/i7Rg83z5Y4

Yes she will make a great one.

SEN. KENNEDY: "When does life begin, in your opinion?"

Odd that the claim is the first black woman on the Supreme Court then, if she cannot categorically state she is indeed a woman. Or even alive.

6. In Orange County, Florida there is a brand new policy for the current academic school year relating to student athletics. Starting from September 2021, all student-athletes are required to undergo an electrocardiogram and be cleared by a cardiologist prior to playing on a sports team at any of the county’s schools.

Thank you all for your continued readership.

I know it’s getting weird. But please bear with us. We attempt to present counter-narratives and truths that are hidden and analysis of what we thing is the strategic level thinking which drives much of what we see in the created reality we are all now immersed in. There will be times when this is difficult to do, and to read, and to understand at all levels. But seeing all this as a created reality, a Pseudo reality, being used as an attack on actual experiential reality, helps a lot.

I push Stephen Coughlin’s paper a lot here. But probably not enough. Its a huge ask to read it. But those that are curious, try even 4 or 5 pages a day for a week or so, and see what it does to your understanding.

This was the first presentation of the event.

This is a really outstanding presentation by Dr. McCullough. He hits a lot of balls out of the park in this one, and there are more than a couple of highly quotable lines.

This makes a great double feature with Dr. Peter McCullough’s appearance on Alex Jones. Peter, as a deeply versed scientist in these issues, tends to explain them well, but often very quickly. The linked video, may be worth watching twice or going over a couple of parts a few times. The explanations are very good. But its hard to absorb some of the concepts when fired from a Gatling gun.

Dr. McCullough starts out by explaining some of the costs, and just some, that he has paid for actually doing science and medicine.

All in all, this is a 110 minute presentation.

The original headline at Lifesite:

DEMAND to be treated with effective meds, dentists got it right

In this interview, Dr. Hodkinson focuses on the pressure being applied on Dr. Peter McCullough for his brave stance for medical truth. Both in terms of effective treatments for Covid19, and in terms of exposing the lack of informed consent in terms of taking the new mRNA injections. To put it at its very mildest.

For an excellent write up and related videos, please see this Rair Foundation post

This is the Stew Peters show. Im uncertain about some episodes he has done. He has promoted a woman who claims that the injections are nearly pure Graphene oxide and are poison. There was no evidence given for her claims other than more claims of evidence. We didn’t post them here because there is no doubt that the companies that make these products are looking to discredit genuine critics of the injections with actual data and science behind them, by equating them with easily falsifiable claims. A good strategy from a propaganda point of view.

Not to say that she was deceiving us necessarily. But for her to be right, there would have to be a lot more deaths than there are, and it would mean all the doctors and scientists who have come out against this substance are wrong in their explanations of what is going on with it and how it effects the body. Charles Hoff, (who Dr. McCullough refers to in this interview) the Canadian doctor for example who discusses micro-clots formed by the spike proteins and impacting the capillaries, this makes a lot of sense and explains a lot of the effects we actually see in people, both in VAERS and even people I talk to on the streets who report side effects. Which is nearly all of them.

Dr. McCullough though, we have a lot of time for. He has a solid science and medical background and his predictions and work with ivermectin are really superb.

ATLANTA, Ga. — Thomas Renz, an Ohio-based attorney, said at a conference in California last weekend that he is filing a federal lawsuit on behalf of a whistleblower from the Centers for Disease Control (CDC) who is claiming there are at least 45,000 deaths from one of multiple reporting systems that report to the Vaccine Adverse Effect Reporting System (VAERS), which is maintained by the CDC.

The most recent data dump from VAERS showed 11,988 deaths, including 997 deaths among unborn babies, linked to the COVID-19 shots through July 9. That comes after jumps in the death count of 2,063 and 1,943 the previous two weeks.

But, according to Renz, that is a vast undercount of the deaths. He said with the aid of America’s Frontline Doctors that he’s filing a lawsuit on behalf of a CDC whistleblower who has apparently signed a “sworn declaration, under the threat of perjury.”

“I know based on this woman’s testimony … that there have been 45,000 deaths based on how many people died within three days of the vaccine, in just one system that’s reporting to the federal government,” Renz said. He added: “And let me tell you what, there are reportedly around 11 or 12 systems that are reporting deaths and injuries to the government.”

Renz has filed multiple lawsuits concerning COVID-19, including one in May of this year seeking a temporary restraining order to stop allowing the experimental vaccines to be given to anyone 16 or younger.

In Sept. of 2020, Renz filed a lawsuit against Ohio Gov. Mike DeWine for his lockdown measures.