A bit of background:

Way, way off the north-west coast of Australia, closer to Indonesia than Oz, lies a little itty bitty speck called Christmas Island. It used to be considered Australian Territory on a par with the mainland until the “asylum seekers” and their enablers, the people smugglers and refugee activists, realised that if you got to Christmas Island and claimed asylum, you’d be afforded all the legal and other comforts you could ever want without having to get all the way over here.

So a detention centre was built there, to process claims, which was difficult because somehow, these “refugees” could make it to Indonesia from Iraq, Iran, Afghanistan, Pakistan and so on, and get onto a boat, yet still not have any papers that would identify them.

This detention centre wasn’t built to house more than around 600 or so people.

Under John Howard, aka the Evil Right Wing War Monger (the last conservative Prime Minister), regulations were toughened up and an exclusion zone was devised. So now you could get to Christmas Island, but you didn’t automatically get Legal Aid or instant acceptance. Also introduced were Temporary Protection Visas, which did not give you all of the rights and benefits of a full Refugee Visa.

When John Howard was voted out in 2007, Kevin Rudd of the Australian Labor Party became PM, and as a part of his platform, he promised to loosen up the harsh regime that Howard had instigated. 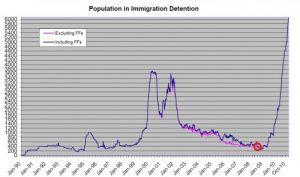 Bolta’s graph outlines how since the laws have been loosened, there has been an exponential increase in boats arriving carrying illegal immigrants (or asylum seekers if you prefer).

There are currently over 2000 of these people on Christmas Island (with several thousand more on the mainland in detention centres and four-star motels), from several different nationalities.

If you spend enough time at Aussie blogs, you might come across a rare sighting of a commenter by name of The Frollicking Mole. The Mole has worked in the detention centres, and has had his say about it.

The Labor government’s enabling of more people seeking to gain entry to Australia and the benefits that accrue upon acceptance as a refugee has led to the current rioting.

Especially since detainees are now being flown to the mainland to protect them from the violence.

Once on the mainland, they’ll be pretty much right.

Not sure about the rest of us, though.

6 Replies to “Christmas Comes Early To The Island.”