(More on Islam and slavery here)

A former hospital director has been ordered to pay £25,000 to an African woman she kept as a slave in London.

Mwanahamisi Mruke, 47, was flown from Tanzania in 2006 and made to work 18-hour days for Saeeda Khan, 68, at her home in Harrow, north-west London.

Khan was convicted of trafficking a person into the UK for exploitation.

The judge at Southwark Crown Court, who also gave her a suspended nine-month prison term, said she was guilty of “the most appalling greed”.

Judge Geoffrey Rivlin QC said Khan had told “a pack of lies” during her trial by saying her victim, whom he described as “naive and illiterate”, was treated as part of the family.

Sentencing her he said: “Your own behaviour was callous and greedy. 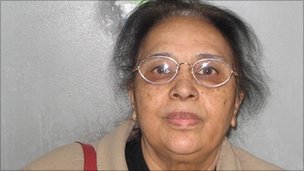 Saeeda Khan ordered Mwanahamisi Mruke around by ringing a bell

“You could easily have afforded to pay her a reasonable sum by way of wages. You chose to give her virtually nothing.”

He told Khan that her age, the fact she has two adult disabled children and was in poor health had prevented him from passing an immediate custodial sentence. (Video below the fold)

During the trial jurors heard Miss Mruke was denied her passport and liberty and endured the ordeal to support her daughter through college in Africa.

Ms Mruke said she could “never forgive” her captor for her four-year ordeal.

After bringing her into the country from Tanzania, Khan initially gave her an allowance of £10 a month to work around the clock at her beck and call, the court heard.

Within a year she stopped paying her altogether.

“Even the money I was promised, I was never paid. I feel terrible about this,” Ms Mruke said.

“I was hoping I would receive a salary and improve my life. But my hopes were dashed, my strength was reduced and I became unwell.”

Ms Mruke was brought to the UK after getting a job at a hospital in Dar Es Salaam in Tanzania which Khan owned.

Khan told her that she would work six hours a day and that her daughter in Tanzania would be paid 120,000 Tanzanian shillings a month, equivalent to £50.

But the court heard how Khan fed her two slices of bread a day and ordered her around by ringing a bell she kept in her bedroom.

Ms Mruke was banned from leaving the house and never learned English because the family watched Pakistani TV.

Beginning work at 0600 GMT, she would often not be allowed to rest before midnight as she cleaned, gardened, cooked meals and accompanied Khan’s disabled son on walks. 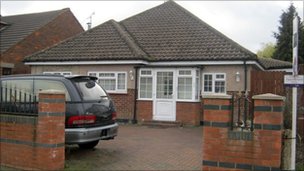 Mwanahamisi Mruke was not allowed to leave the house in Harrow, north-west London

Ms Mruke told the court that sometimes she did not sleep due to the long hours she had to work, doing “all the housework, cooking, cleaning, inside and out”.

“She didn’t attack me physically. It was just the words and the way she was treating me.

“I feel that justice should be passed and others should learn from this. I feel terrible about her.”

Ms Mruke’s plight was discovered when she went to see a doctor for an examination of her varicose veins.

During her three-year ordeal, Ms Mruke’s parents died and her daughter was married, yet she was granted no contact with her family.

Ms Mruke is now pursuing a civil claim against Khan.