By Michael Seamark, Katherine Faulkner and Stephen Wright
Last updated at 11:20 PM on 14th May 2010

A former minister was stabbed twice in the stomach by a knife-wielding woman today as he held a surgery for constituents.

Stephen Timms was attacked by the 21-year-old, who appeared to be wearing Muslim dress, at his regular Friday afternoon surgery in his East London constituency.

She lunged at him and stabbed him twice before being wrestled away by a security guard and arrested.

An aide to Mr Timms was hailed a hero after it was revealed he wrestled the knife out of the hands of the female attacker.

Andrew Bazeley, 22, bravely disarmed the woman who had made an appointment to see Mr Timms at his constituency surgery, witnesses said.

Mr Bazeley was left covered in blood after he grabbed the knife and restrained the woman until a security guard arrived.

Mr Timms, 54, was being treated in hospital tonight and said to be in a stable condition.

Eye-witnesses screamed in terror as they watched the woman stab him in the abdomen.

One person who arrived moments after Mr Timms was attacked, said she saw blood on his shirt and an Asian woman being restrained by security guards.

Police arrested the attacker and the MP –  one of the tallest politicians in Parliament –  was taken to the Royal London Hospital.

The senior Labour MP, one of the longest surviving and least controversial members of the former Labour Government, was said tonight to be in ‘good spirits’.

Scotland Yard tonight said a knife had been recovered from the scene.

Mr Timms will be kept in the hospital overnight for observation and treatment, said Unmesh Desai, the MP’s aide during the General Election.

Sagal Ahmed,16, a student at Kingsford Community School, was in the community centre in Beckton when the stabbing happened.

‘We just heard this big commotion so we ran in to the room,’ she said.

‘The security guard had grabbed this Asian woman. She was wearing a long black outfit like what Muslims wear and an orangey headscarf. I think she was a Muslim.

‘She wasn’t saying anything. They were just grabbing her to keep her still. She was really shaking.

‘The Muslim woman seem shocked and distressed. It was the most shocking thing I’ve ever seen.

‘Then we saw the man (Stephen Timms) getting put in another room. We saw the blood on his shirt but I couldn’t tell where he’d been stabbed. They were dragging him.

‘He was conscious. He looked shocked and he was pale.’ 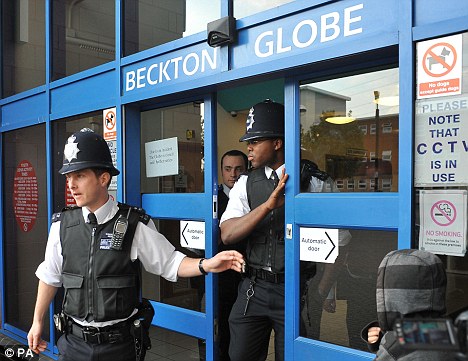 Arrest: Police investigate the scene of a stabbing at Beckton Globe local services centre. A 21-year-old woman is in custody 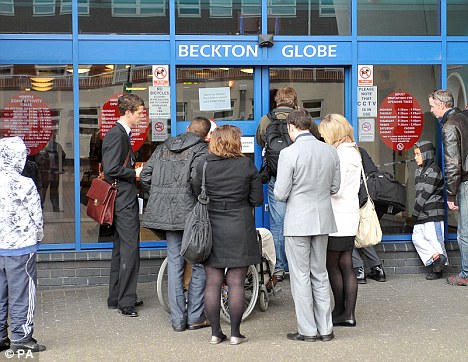 Onlookers: Locals and journalists gather in front of Beckton Globe. One witness said she saw blood on Mr Timms’ shirt and an Asian woman being restrained by security guards

Mr Timms, the MP for East Ham, was meeting constituents at the Beckton Globe local centre his first surgery since the General Election.

Sir Robin Wales, the elected Mayor of Newham, said: ‘My understanding is there was an appointment made for the woman.

‘At the beginning of the interview she stabbed him. The security guard came in and disarmed her and held her until the police arrived.

‘He was definitely stabbed with a knife. It was twice near the abdomen and I believe he is being kept in hospital overnight for an exploratory operation.’

Sir Robin, who has known Mr Timms for more than 20 years, said he spoke to the MP tonight.

‘I think he was handling it very well,’ he said. 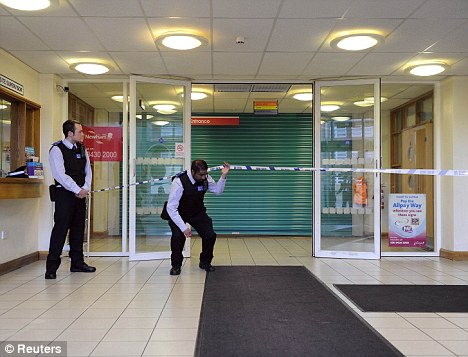 The centre was shut, while police investigate: MPs have since sent messages of concern and well wishes to Mr Timms and his wife Hui-Leng Lim 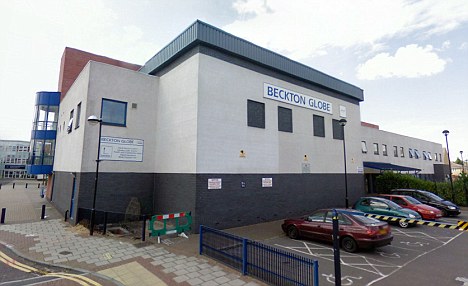 Acting Labour leader Harriet Harman expressed her concern saying: ‘One of the great strengths of the British political system is the every day accessibility of MPs to their constituents but we can’t have a situation where MPs are at risk.’

Shahid Mursaleen, spokesman for the Newham-based moderate Muslim organisation Minhaj-ul-Quran UK, said: ‘We are shocked and saddened to hear that Stephen Timms MP has been stabbed.

‘Mr Timms has always been close to his constituency and a friend of Muslims living in east London. He has been a good friend of Minhaj-ul-Quran.

‘We wish him well and his recovery to be soon and hope that he can resume his position as MP of East Ham soon.’ 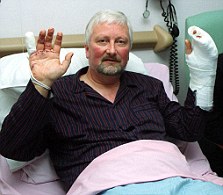 In January 2000, deranged Robert Ashman attacked Liberal Democrat MP Nigel Jones with a samurai sword as he conducted a surgery in his Cheltenham constituency.

Ashman seriously injured Mr Jones and stabbed to death his aide Andrew Pennington as he tried to protect the MP.

Ashman later claimed he had carried out the attack because his MP was not doing enough to help him after he lost his job, got divorced and was declared bankrupt.

The former engineer was found guilty of manslaughter and attempted murder.

Sentencing the father of two at the time, a High Court judge said Ashman was so disturbed she could not foresee a time when he would be safely released.

But Ashman has since been allowed back on the streets after psychiatrists deemed him fit to be let out.

He is now living in a ‘halfway house’ in Bristol, just 35 miles away from the scene of the killing in Cheltenham.

Although he is supervised by police and has to obey a curfew, he is free to go out alone during the day.

Mr Pennington was posthumously awarded the George Medal for his attempts to protect Mr Jones.

But the attack on the former Treasury minister raised new questions about security surrounding politicians.

Nine years ago Liberal Democrat MP Nigel Jones was seriously injured and his assistant murdered by a man wielding a samurai sword while he conducted a surgery at his Cheltenham constituency.

Cabinet ministers and former ministers, particularly those who served in departments such as the Home Office and the Northern Ireland Office, have security protection but the majority of MPs do not.

He said tonight: ‘I have always wanted MPs to be accessible to their constituents because they are the people who put us in the House of Commons.

‘But these kind of events make you wonder what kind of security measures need to be put in place.’

Newly-elected Labour MP for Stalybridge and Hyde Jonathan Reynolds said: ‘Appalled to hear Stephen Timms has been stabbed at his parliamentary surgery.’

Mr Timms, who married Hui-Leng Lim, 56, in 1986, has the safest Labour seat in the country and increased his majority in last week’s election.

The MP’s personal popularity in his constituency is reflected by the fact that he secured a 7.7 per cent swing from the Conservatives in last week’s election, when Labour was generally losing ground across the country.

He won a remarkable 70.4 per cent of the vote and his 27,826 majority is the largest in the new House of Commons.

He describes himself as a Christian Socialist and is Labour’s vice-chairman for faith groups.

Mr Timms has been MP for the constituency – and previously for Newham North East – since 1994.

He has regularly spoken out against knife crime in his constituency, particularly among young people.

In 2006, he spoke at an event to mark the death of 15-year-old Charlotte Polius, who was stabbed while walking in the street the previous year. 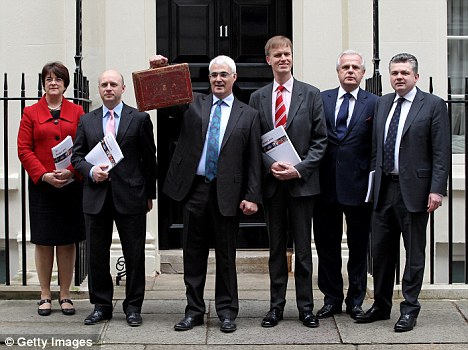 He supported Labour legislation which gave teachers the power to search pupils for weapons and raised the age at which a knife could be purchased legally to 18.

Educated at Farnborough Grammar School in Hampshire, Mr Timms read mathematics at Emmanuel College, Oxford, and before entering Westminster in 1994 he worked in the telecommunications industry for 15 years.

He held jobs in the Labour administration throughout its 13 years in power, first as a parliamentary aide and then in ministerial posts as financial secretary to the Treasury and in the Departments for Social Security, Education, Trade and Industry and Work and Pensions.

He joined the Cabinet in 2006 as chief secretary to the Treasury – effectively Chancellor Gordon Brown’s second-in-command, with responsibility for keeping departmental budgets under control.

After Mr Brown became Prime Minister in 2007, he was dropped from the Cabinet and made competitiveness minister in the Business Department, before moving back to the Department for Work and Pensions and then returning to his old job of financial secretary to the Treasury in 2008.

Never a flashy performer or household name, he has been regarded as a safe pair of hands on issues like the economy, pensions and business.