That would be the truthful answer if the Taliban were asked why they feel the best way to attack a government is through it’s civilian population. Since the 1000 or so hostages taken by Islamic militants are undoubtedly a Muslim majority, one can only assume they will be used as a mass human shield for the exodus of Mo’s minions. As to the number who will be made an example of is anyone’s morbid guess.  At the end of the day [or week] this story has the potential to be huge in scale of people and tragedy. Those points will make the news but how these events and others in the past relate to Islam will again be ignored. 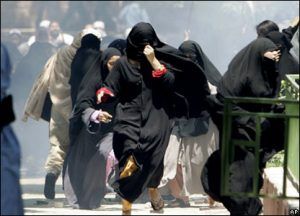 Militants in a Taliban-held area of Pakistan are believed to have abducted more than 400 students and their relatives Monday after a ceremony marking the last day of school, a police official told CNN.

The abduction took place in North Waziristan, located in Pakistan’s tribal region, where the military has waged a bloody battle against Taliban insurgents.

The militants seized more than 30 vehicles carrying 443 students and their relatives who were leaving the ceremony marking the last day of school at Razmak Cadet College, according to Iqbal Marwat, a police official in nearby Bannu District.

He said 22 students in two vehicles managed to escape; the remaining 421 students and their relatives are still missing. The students are between the ages of 9 and 22, Marwat said.

The reported abductions follow a series of attacks on civilians in northwest Pakistan.

An explosion struck a bus station in the city of Kohat on Monday, killing two civilians and wounding 18, a police official said. Kohat is in North West Frontier Province, where a string of militant attacks in Peshawar and Dera Ismail Khan killed 12 people last week.

Militants also struck the Pakistani city of Lahore last week, killing 27 people in a suicide attack on a building that housed police, intelligence, and emergency offices.

Pakistan’s Taliban claimed responsibility for the Lahore bombing, and threatened to continue attacking cities in Pakistan until the military ends its operations against Taliban militants.

The Pakistani military has been conducting a month-long offensive against the Taliban, centered in the Swat region of North West Frontier Province