President Obama looks to pardon non-violent Taliban.
Pakistan surrenders the Swat Valley and it’s inhabitants to the Taliban.
One has to ask if America or Pakistan will ever realise they are in a war.
All these concessions  are seen as victories by the Taliban, and rightly so.
They are now stronger, more bold and are riding a wave of momentem. 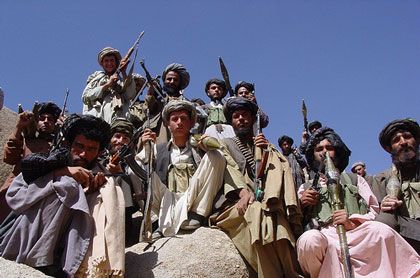 ISLAMABAD (AP) — A suicide bombing at a crowded Shiite mosque south of Pakistan’s capital killed 22 people Sunday, the latest evidence of how security in the U.S.-allied nation is crumbling well beyond the Afghan border region where al-Qaida and Taliban fighters thrive.

The violence came as a senior Pakistani Taliban commander said his group was behind a deadly suicide bombing Saturday night in Islamabad and promised two more attacks per week in the country if the U.S. does not stop missile strikes on Pakistani territory.

Sunday’s suicide bomber set off his explosives at the entrance to a mosque in Chakwal city in Punjab province, some 50 miles (80 kilometers) south of Islamabad, said Nadeem Hasan Asif, a top security official in the province. The blast killed 22 and wounded dozens, he said.

TV footage showed pools of blood in front of the mosque. Torn clothes and shoes littered the ground, while at least one car and four motorcycles were damaged. A policeman with bandaged legs and a wounded man wearing a bloodstained shirt were shown on hospital beds crying in pain. A woman standing in the emergency ward of the hospital wailed, “Oh my God! Oh my God!”

Farid Ali said he was leaving the mosque when he felt the blast on his back.

Prime Minister Yousuf Raza Gilani condemned the attack and directed authorities to “bring the perpetrators to justice.” Such statements from the premier have become a matter of routine in Pakistan, where extremists seem bent on wreaking havoc.

Most of the militant attacks in Pakistan occur in the northwest, where the Taliban and al-Qaida have strongholds from which they plan strikes on U.S. and NATO forces across the border in Afghanistan. Still, all of the country’s major cities have experienced assaults.

About a week ago, gunmen raided a police academy on the outskirts of Lahore, a vibrant city in the east near the Indian border, killing at least 12 people in a commando-style attack that prompted an eight-hour standoff with security forces.

Late last month, a suicide bomber blew himself up in a packed mosque near the Afghan border at the climax of a Friday prayer service, killing 48 people and wounding scores more in the worst attack to hit Pakistan this year.

Some militant groups that are historically sectarian are believed to have forged ties with the Pakistani Taliban, themselves followers of a harsh brand of Sunni Islam.

A man who goes by the name Umar Farooq and says he speaks for the shadowy militant organization Fedayeen al-Islam told The Associated Press via telephone that the group had staged Sunday’s attack on the mosque as part of a “campaign against infidels.”

He also warned the U.S. to stop its drone-fired missile strikes on militant targets in Pakistan’s northwest.

Little is known of the group, but it is believed linked to the Pakistani Taliban.

In the past it has said it was behind other attacks, including the bombing of Islamabad’s Marriott Hotel and last week’s attack on the police academy in Lahore, but officials have never named it as a primary suspect.

Ignoring official Pakistani protests, the U.S. has escalated its campaign of missile strikes since August of last year.

Pakistani Taliban chief Baitullah Mehsud — who also claimed responsibility for the attack on the police academy — has vowed more assaults unless the U.S. shelves the drone-fired missiles.

His deputy Hakimullah Mehsud told AP the Pakistani Taliban carried out Saturday’s suicide attack against the paramilitary camp in Islamabad. He, too, cited the missile strikes, and promised that the group would carry out two suicide attacks per week in Pakistan.

He also said Pakistani troops should withdraw from parts of the northwest.

“We have shown enough restraint,” Hakimullah Mehsud said. “Previously, we were striking once in three months, but from now onward we will go for at least two suicide attacks a week.”