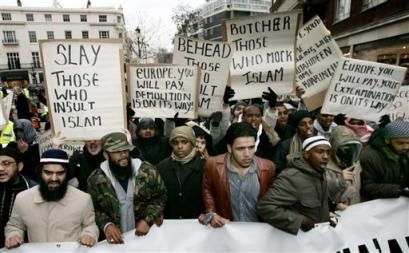 Further evidence of muslim violence against the kaffir. This incident of ‘Street Jihad’ in the UK, ususally involves muslim gangs, quickly gathered together via cell phone calls, using weapons to brutally beat –  a lone victim or small group of British men or boys.  Several of the past blogs regarding this are:

The local newspaper reports “three” incidences of street violence that occurred this past Saturday.

The first case involved between 10 and 20 muslim (Asian) men using baseball or cricket bats to assault four white/British men.  It is crystal clear that the first incident was an intentional and malicious assault by a large gang of muslim Street Jihadists on a much smaller group of British men = typical MO of Street Jihad. Note too how the first part of the article makes it sound like both groups were armed – yet further on it appears to say that just the muslims were armed. One wonders if this constituted Kuffarophobia?? No arrests made.

The second so-called assault has an Asian man/ muslim being given ‘a slap’ by a couple of British men. No armed gangs of British men beating up a lone man. No indication that this was in retaliation to the gang assault. Yet unsurprisingly – an arrest was made. END_OF_DOCUMENT_TOKEN_TO_BE_REPLACED