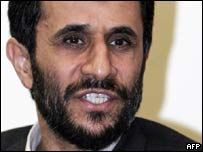 Iranian President Mahmoud Ahmadinejad, who has said that Israel should be “wiped off the map,” has vowed to continue his country’s nuclear program. END_OF_DOCUMENT_TOKEN_TO_BE_REPLACED

In typical British fashion this makes no attempt to draw a conclusion that might favor one side of an issue. While at times this is admirable and at others repugnant this is well done and deserves to be seen.

What is clear, is that one group of people foster hatred through clear fabrication and another attempts to understand why.