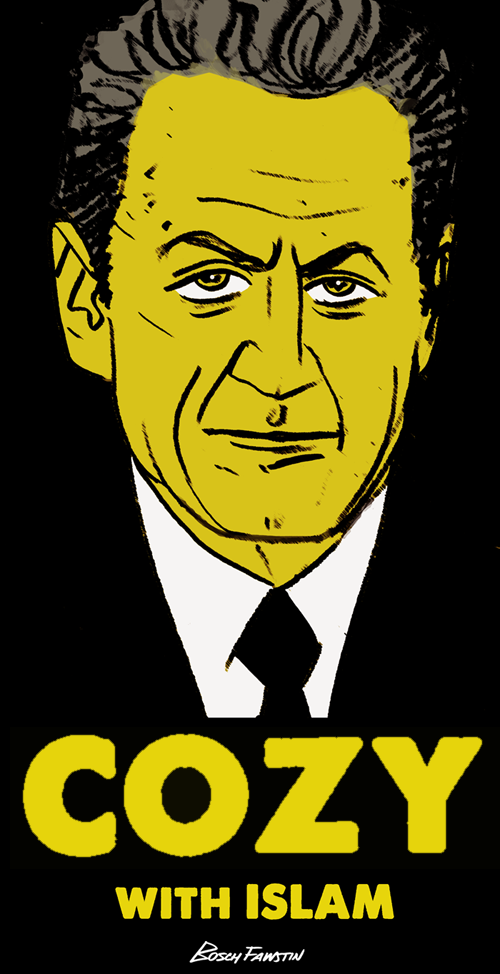 This graphic by Bosch Fawstin beautifully sums up the French President's cowardice. See more of Bosch's work at fawstin.blogspot.com

From the time the perpetrator of the Toulouse massacre turned out to be a jihadist, there’s been a concerted effort by the Lamestream media to shove the entire incident under the carpet – noticed it?

Whereas before, when they happily concluded a “right-winger” must be responsible, every effort was made to tar Marine Le Pen with responsibility so that the media’s Left wing chums in French politics could benefit from these deaths; now it’s an irrelevant aberation by a diseffected and alienated “French citizen” – and of course, “nothing to do with Islam.”

Where are the press flow charts, the impressive graphics, the fine-tooth-comb examinations of the killer’s “manifesto”, the weeks of lengthy essays by “extremism specialists” pointing to malevolent “worldwide networks” that followed the Breivik slaughter?

There’s been none of it! Just a silent attempt to shoosh everything away and return the populace back to more important matters like reality television and celebrity bra sizes. We’ve been doing our best over here at Vlad Tepes to counter this, and the good folk over at JihadWatch have been putting up a valiant fight too.

Here for example, is an absolute tour de force from Dr Spencer:

Imam Sarkozy on Toulouse jihadist: “The Muslim faith has nothing to do with the insane acts of this man”

Muhammad Merah’s murders had everything to do with Islam: he claimed affiliation with al-Qaeda and may have trained with the Taliban, both of which are explicitly and ostentatiously Muslim groups that justify all their actions by reference to the Qur’an and Sunnah. He claimed to be a mujahid, which is a warrior of jihad, which is an Islamic theological and legal concept.

He killed Muslim soldiers who fought in the infidel military — something that only someone who considered one’s loyalty to the umma to trump all other loyalties would have done. So grounded is Merah’s massacre in Islam that it is virtually inconceivable that he would have carried it out had he not been a Muslim.

And so Sarkozy is, like every other leader in the West, whistling in the dark, trying to pretend that there is no problem when there is a huge problem, and basing the future of his nation on the fantasy that the overwhelming majority of Muslims in France do not believe the same things Muhammad Merah believed…

4 Replies to “Sarkozy (and media): “The Muslim faith has nothing to do with the insane acts of this man””