There is a very, very powerful essay over at Darren Greenfield’s blog comparing how and why Jewish children were hunted down and killed in France in the past, and how and why they are being so now. 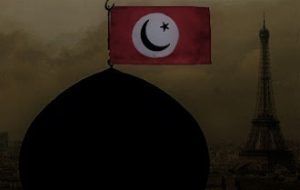 There was a time when Jewish children were hunted down and killed in France. Their killers believed themselves to be members of a superior group that was destined to rule the world and enslave or exterminate members of inferior groups. The cowardice and appeasement of the French authorities allowed them to operate freely, to kill Jews and launch attacks on other countries.

What was then is now again. The occupying army doesn’t wear uniforms, it wears keffiyahs. It doesn’t speak German, it speaks Arabic. It doesn’t believe that it is superior for reasons of race as much as for reasons of religion. It does not view all others as Untermenschen, but as infidels. It looks forward not to a thousand year Reich, but to a thousand year Caliphate.

Mohammed Merah did not chase down a French-Jewish seven year old girl, put a gun to her head and pull the trigger because he came from an economically depressed area or any of the other media spin. He was only doing what Muslims had been doing to non-Muslims for over a thousand years. He didn’t do what he did because he was “radicalized”, he did it because he became a fully committed Muslim.

It won’t end with taking down one man and it won’t end with Jewish children. When your ideology believes that it is in a zero-sum struggle with the rest of the world and that membership means that you are a superior breed of human being because you worship the Fuhrer or Allah, then it won’t stop. It won’t ever stop. Not until the figurehead is toppled, the creed is humiliated and the supermen are shown to be cowards, neurotics, pedophiles, insecure men dressing up their weaknesses in power fantasies.

Between all the non-stop coverage, the expressions of grief, the political pandering, no one is stating the obvious. France has been occupied all over again. Once again the occupation has been carried out with the consent of the authorities who have decided that cowardice is the only way. Vichy France has become Vichy Europe, Vichy America, Vichy Australia, where the blatant appeasement is disguised as honor, treason is portrayed as responsible leadership and collaboration in the mass murder of your own people is never acknowledged as such…

…That simple undeniable fact is denied by government, in every university and in every center of culture. And every one of those deniers has blood on his hands.

Please click through to read the rest of this extremely important seminal piece.

3 Replies to ““No one is stating the obvious. France has been occupied all over again.””