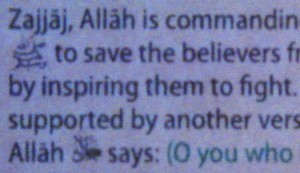 There has been a lot of talk about the magazine Inspire. The one thing that some people are talking about is they can’t find it. Only makes sense for a rational person to want to see something before they comment on it.

So here is page one.

LETTER FROM THE EDITOR
Allah says: (And inspire the believers to fight) [al-Anfal: 65]. It is from this verse that we derive the name of our new magazine. The word used in the verse is “harid” which is commonly translated as incite. However, the word should properly be translated as inspire, motivate, or encourage. The word harid in Arabic carries none of the negative
connotations that the English word “incite” carries. To the contrary, it actually has the opposite meaning. The authoritative Arabic lexicon “Taj al-Arus” quotes the classical Arabic language scholar al-Zajjaj as saying that the verb hari? comes from the adjective harid, which means “a person or a being that
is perishing.” Therefore, he says that when you inspire someone towards something using the verb harid, you are saying that unless they do what you are inspiring them to do they would perish. So the word harid is an inspiration that saves a person and guides them towards what is good for them.

harid is the word used in the above-mentioned
verse. According to this meaning by al-
Zajjaj, Allah is commanding His Messenger
to save the believers from perishing
by inspiring them to fight. This meaning is
supported by another verse in Qur’an where
Allah ??  says: (O you who believe! Respond
to the call of Allah and His Messenger when
they call you to what will give you life) [al-
Anf?l: 24]. Imam al-Qurtub? states that this
verse is referring to jihad. It is jihad that gives
this nation life. We survive through jihad and
perish without it. Our history is a testimony
to that.
This Islamic Magazine is geared towards
making the Muslim a mujahid in Allah’s
path. Our intent is to give the most accurate
presentation of Islam as followed by the
Salaf as-Salih. Our concern for the ummah
is worldwide and thus we try to touch upon
all major issues while giving attention to the
events unfolding in the Arabian Peninsula as
we witness it on the ground. Jihad has been
deconstructed in our age and thus its revival
in comprehension and endeavor is of utmost
importance for the Caliphate’s manifestation.
Under the media foundation of al-Malahem,
we present the first magazine to be issued
by the al-Q?`idah Organization in the
English language. In the West; in East, West
and South Africa; in South and Southeast
Asia and elsewhere are millions of Muslims
whose first or second language is English.
It is our intent for this magazine to be a
platform to present the important issues
facing the ummah today to the wide
and dispersed English speaking Muslim
readership. We also call upon and encourage
our readers to contribute by sending their
articles, comments or suggestions to us.
We ask Allah ?? to assist us in this endeavor
and to guide you and us towards the truth.

5 Replies to “From the editor of Inspire magazine.”