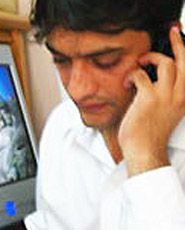 TIMESONLINE… A Muslim lawyer who was defending a man accused of planning the Mumbai terror attacks has been gunned down in a suspected underworld hit.

Shahid Azmi, 33, was representing Fahim Ansari, an Indian accused of carrying out reconnaissance work for the Mumbai attacks, which killed 166 people in November 2008.

Mr Ansari is on trial in Mumbai alongside Mohammad Ajmal Kasab, the Pakistani national alleged to be one of ten Islamist militant gunmen who kept India’s commercial capital under virtual siege for 60 hours.

Mr Azmi, whose rise from convicted child terrorist to respected advocate had made him a Muslim hero, was shot four times in the chest and head on Thursday evening by four men at his home in the middle-class suburb of Kurla in Mumbai.

The attackers made their getaway in a diesel autorickshaw. Police suspect a professional hit.

The young lawyer, who grew up in a slum, had stood out among India’s legal fraternity. Aged 15, he was arrested for allegedly plotting to kill a right-wing Hindu leader in the wake of Hindu-Muslim riots in Mumbai.

He was found guilty of attending terrorist training camps in Kashmir and spent seven years in jail – time he used to study.

Before being acquitted by the Supreme Court he had shared a cell with Mushtaq Ahmed Zargar and Maulana Masood Azhar – two of the three terrorists who were released in exchange for hostages when an Indian Airlines flight was hijacked en route from Kathmandu to Delhi in 1999.

Kartikeya, a court reporter for The Times of India, who knew Azmi well, said: “He was a success story – a terror suspect who had become a respected lawyer. He’d become a hero among Muslims for speaking out against atrocities against the community. His murder is a huge shock.”

Speaking before his death, Mr Azmi said: “I had seen policemen killing people from my community. I have witnessed cold-blooded murders. This enraged me and I joined the resistance.”

The investigation into his murder must now trawl the murky world where terrorism meets India’s criminal underworld.

Mr Azmi had worked on several high-profile terrorism cases, including the 2006 Mumbai train blasts – work that would have earned him many enemies.

One theory is that he was targeted for opposing the bail of a nephew of Dawood Ibrahim, India’s most powerful underworld don.

The head of D-Company, a feared Mumbai-based crime syndicate, and one of the world’s most-wanted men, Ibrahim is widely believed to have worked closely with al-Qaeda. He has also been linked by the US authorities to a massive drugs smuggling operation that spans countries including Britain.

Even so, Mr Azmi’s murder has shocked many connected to the India’s underworld. The country’s crime overlords have a gruesome record of ordering assassinations, but mostly abide by a code that says lawyers should not be hit.