Below are two videos from the people who bring us all the videos of the barber section of paris, some of which, Vladtepes has subtitled and posted here from French.
What you see below the videos is a machine translation from French, but please go to the original site and see the photos and explanations of what you are seeing here. This is very clearly the illegal establishment of Islamic primacy here in Paris and has little to do with any sort of quaint cultural ritual you may see in a China Town in any large city. This, is war. The French, are losing.

A mass of Muslim occupation of the whole pavement of the Boulevard Barbès, and not hesitating to unroll their mats on the same floor of the Rue de la Goutte-d’Or, blocking all traffic loads, in total disregard for their drivers:

For the umpteenth time, we renew our appeal: how long the French authorities leave they take before to intervene and stop these illegal methods? Combien de rues seront occupées, confisquées, conquises par les musulmans, en plein Paris, avant que les autorités françaises ne se décident enfin à agir ? Source How many streets are occupied, confiscated, conquered by Muslims in the heart of Paris before the French authorities do finally decide to act?

I do have to wonder about this lone Klansman from the second video though…. 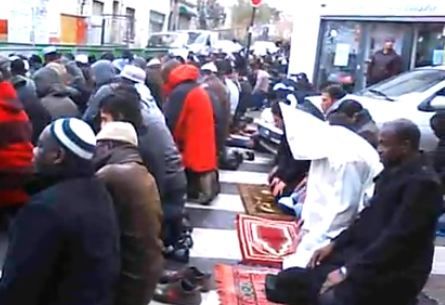 4 Replies to “Christmas in Paris. Muslims ‘preying’ for five blocks.”