Jewish bride and her father arrested on Temple Mount for uttering non-Muslim prayer. Found on TROP and from Israel national News this has to be the best example yet in defiance of the multi-culti morons who think Islam is an enriching aspect of some utopian mosaic.
by Hana Levi Julian 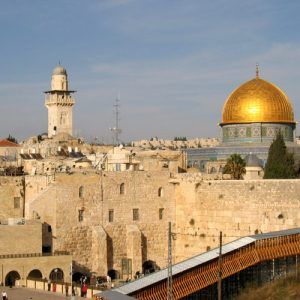 (IsraelNN.com) A Jewish bride and her father were arrested on the Temple Mount the day before her wedding, after an Arab policeman claimed he saw the father muttering prayers and the bride nodding her head.

The father and daughter were being taken around the site on Wednesday morning by her brother Eli, a volunteer who conducts regular tours at the Temple Mount, when suddenly they were accosted by the Jerusalem policeman.

“We were in the northern part, and I was showing them the archaeological evidence when suddenly a police officer came over to us, Mahmoud Hativ was his name, and h claimed that my father had muttered prayers. “We tried to argue with him and said it wasn’t true, but he said, ‘You can’t fool me,’ and insisted that my father had prayed,” Eli told Israel National News.

“My sister was just standing there silently, not moving at all. She didn’t say a word. It was her first time at the Mount. Other cops came over, Mahmoud said that she had also been involved, and they decided to arrest them both,” he continued. “He let me go right away, because he couldn’t make any claim against me.” His sister and father were taken to the Kishla police station near the Jaffa Gate in the Old City of Jerusalem.

‘Lack of Will to Exercise Israeli Sovereignty’

“The fact that a father comes to the holiest place of the Jewish people and can be arrested simply for allegedly moving his lips is an outrage,” Eli said.

“The Supreme Court has repeatedly ruled that the holy sites of all religions have to be protected and respected – that explicitly includes the rights of Jews on the Temple Mount. Jerusalem police continue to ignore that ruling.”

Asked if he believes U.S. pressure on Israel to make concessions to the Palestinian Authority had anything to do with the incident, Eli said, ‘No. It is a result of the lack of will of the Jerusalem police to exercise Israeli sovereignty over the Jewish holy places in Jerusalem, not U.S. pressure on Israel. It is unheard of to arrest someone just for praying in their own religion. In the U.S. that wouldn’t fly. There is no public place in the U.S. where a Jew could not pray. It is unfortunate, and sad.”

The family, which immigrated to Israel from New York in 1996, lives in Beit Shemesh.

The two were held for several hours. At approximately 11:30 a.m., the two were ordered to sign a declaration which they were told said they would promise not to return to the Temple Mount for 15 days.

However, the father, who spoke with Israel National News from the courtyard of the police station while waiting to be questioned by the police commander, said that further examination of the paper showed they had been misinformed. The declaration actually said that they were confessing to have violated a law about disturbing the public order.

It was also made equally clear that if they did not sign the paper, they might not be freed for hours – perhaps not even in time for the young woman to make it to her own wedding.

“The police officers talked very improperly to my daughter. She was very upset – in tears – and they ridiculed her. ‘What’s the matter, are you baby?’ they mocked her.”  Her father immediately fired back, “That’s how you talk to someone?”

The father said that the officer in charge threatened to keep them longer in response. “Be careful,” the cop warned. “If you talk to me that way, I can keep you here for a few more hours.”

“So I asked them: ‘How would it be if we arrested a young lady for praying anywhere else in the State of Israel? Or maybe a Muslim woman for praying in Mecca? This is about police enforcement – so enforce the law! And they answered me, ‘It’s a very sensitive issue. This is the law.’ That’s what they answered me,” said the father. “So I shut up, because I wanted to get out of there, and he would have kept us for hours. We signed the paper, and we will deal with it in the court of public opinion.”

The father was not praying although he was, in fact, moving his lips. “They asked me if my daughter was nodding her head. I said I didn’t know – but if she can now be arrested for nodding her head… well, anyway, in the end, that’s what they got her for. Nodding her head. That’s the nature of the public order.”