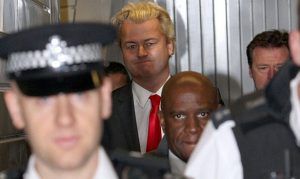 TIMESONLINE…A far-right Dutch politician who was turned away from Britain after criticising the Koran as a ‘fascist book’ was today forced to hastily change the location of a scheduled press conference in London in the interests of his own security.

Geert Wilders, who is head of the Freedom Party, flew into Heathrow airport this morning after winning a court battle to enter the country.

Mr Wilders had been due to host a press conference on College Green, opposite the Palace of Westminster, at noon.

However, about thirty male activists from a group called Islam for UK began chanting: “Wilders burn in hell” and “Sharia for UK”.

Brandishing banners saying, “Sharia is the solution, freedom go to hell” and “Geert Wilders deserves Islamic punishment”, the protesters were held back by about fifty policemen.

Mr Wilders was advised not to confront or walk past the protesters and instead to hold his press conference in the nearby Abbey Gardens building used by members of the House of Lords.

Mr Wilders told journalists that he lived under constant security because of his views. Explaining his controversial views on Islam, he said: “I have a problem with the Islamic ideology, the Islamic culture, because I feel that the more Islam that we get in our societies the less freedom that we get.”

He was asked if he still believed that Islam was a retarded culture. He answered that under some Islamic cultures, “homosexuals are beaten up and killed. Journalists are jailed. That action is retarded.”

He said that he stood by his views that the terrorist attacks on New York on September 11, 2001 were directly linked to the Koran.

The 46-year-old first sparked controversy after making a film entitled Fitna which defined the Koran as a fascist book. He is not expected to show the film while he is in Britain.

In February, Mr Wilders was denied access to Britain amid Home Office fears that his presence could trigger inter-faith violence.

That decision was overturned on appeal this week. Mr Wilders arrived in London during the late morning and it is thought that he intends to leave the country later today.

Abu Muaz, from Islam For UK, said: “If I were to say some of the things he has said I would be arrested under the Terrorism Act. But because there is a war on Muslims he gets an easy ride.”

He added: “When Muslims defend their faith, they are seen as extremists. This man [Wilders] has said more than enough. The future is bright, it is not orange, it is Islam.”

Mohammed Shafiq, from the Ramadhan Foundation, said it was right that Mr Wilders had been allowed into the UK, but he should be closely monitored while in the country.

He said: “The right decision was made to let him in because we believe in freedom of speech in this country, no matter how abhorrent someone’s views are. But he has got to be monitored so that he doesn’t say anything to incite religious violence.

“If you start attacking somebody’s faith in the way that he has, they could react violently. Islam is not above criticism, and criticism based on a mutual respect and tolerance is fine. But his hatred is no different to the intolerance that the BNP and the far-Right are preaching.”

The Muslim Council of Britain branded Mr Wilders “a relentless preacher of hate” and objected to “the rapturous welcome he is receiving in the name of free speech”.

Muhammad Abdul Bari, it’s secretary-general, said: “At a time of heightened tension, with the unprecedented rise of the far-Right, we must all pull together and focus on points of unity and cohesion. Our unhealthy obsession with divisive figures only bolsters their objective to sow discord on the streets of Britain.”

Addressing journalists alongside the UKIP peer Lord Pearson, Mr Wilders said that his visit was “a victory”. He pledged to return to Britain and to show his film.