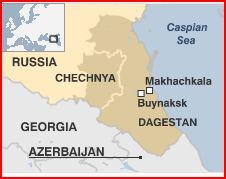 BBC NEWS…Russian police are hunting gunmen who killed seven women at a sauna and four policemen at a checkpoint in the troubled southern region of Dagestan.

The attack happened on Thursday in the town of Buynaksk, 41km (25 miles) from the regional capital Makhachkala.

Police say they know the identities of some of the gunmen, who fled into a forest after the attack.

Separately, four policemen and two militants were killed in a clash near Grozny, in neighbouring Chechnya.

Moscow has been keen to portray Chechnya and the region as an area returning to normal after years of unrest.

But these latest attacks form part of a wider pattern: a growing anti-Kremlin, Islamist insurgency that appears to be spreading across the North Caucasus, the BBC’s Gabriel Gatehouse reports.

In Thursday’s attack in Dagestan, at least 15 gunmen opened fire on a traffic police checkpoint on the edge of Buynaksk, Russian media quoted local police as saying.

The gunmen are reported to have hijacked a minibus, which they later abandoned.

They went on to attack a sauna at a nearby health complex, killing seven women workers there.

Dagestan has been plagued by violence in recent years, much of it linked to the conflict between security forces and separatist rebels in Chechnya, a mainly Muslim Russian republic.

Russian forces have fought two wars against Islamist rebels in Chechnya since 1994. The conflicts claimed more than 100,000 lives and left it in ruins.

Clashes with militants are also common in Ingushetia, which borders on Chechnya to the west.