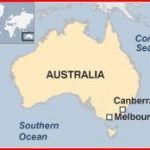 BBC…Australian police have arrested four people in the southern city of Melbourne after uncovering what they say was a plot to launch an attack.

The group was preparing a suicide attack on an army base, police said.

More than 400 officers were involved in searching 19 properties across the city before dawn on Tuesday.

The suspects are Australian nationals of Somali and Lebanese descent; one man, aged 25, has so far been charged with terrorism offences.

The man from the Glenroy district of Melbourne is due in court later, as are the others detained in the operation.

“Police believe members of a Melbourne-based group have been undertaking planning to carry out a terrorist attack in Australia and allegedly involved in hostilities in Somalia,” a police statement said.

The men’s intention was to actually go into the army barracks and to kill as many soldiers as they could before they themselves were killed,” said Tony Negus, acting chief commissioner of the Australian Federal Police.

Holsworthy Barracks on the outskirts of Sydney was one of the planned targets, according to police.

The attack would have been the most serious terrorist attack on Australian soil, he added.

“Members of the group have been actively seeking a fatwa or religious ruling to justify a terror attack on Australia,” said Mr Negus.

“The sobering element of today’s development is the reminder to all Australians that the threat of terrorism is alive and well, and this requires continued vigilance on the part of our security authorities,” said Australian Prime Minister Kevin Rudd.

The country’s security level is unchanged at medium, where it has remained since 2003.

The police said that the raids came after a seven-month operation involving several state and federal agencies.

Homes across several northern Melbourne suburbs were among those raided, The Australian reports.

It adds that those arrested are thought to be linked to the Somali-based al-Shabab group, which seeks to overthrow the Somali government and is believed to have links to al-Qaeda.

The BBC’s Nick Bryant, in Sydney, says reports suggest electronic surveillance was used to monitor members of the group.

Members of the Melbourne-based cell reportedly travelled to Somalia in recent months to train, The Australian reports.