Was away working for the last few days. Here are some stories that caught my eye that I missed.

August 2, 2009
Pakistani paramilitary forces have been deployed to Gorja, eastern Pakistan to halt religious riots that left eight Christians dead on Aug. 1, Agence France-Presse reported Aug. 2. The riots were sparked by rumors that a Koran had been defaced. Hundreds of Muslims burned and looted Christian homes in Gorja, and the eight people were killed after gunfire broke out. 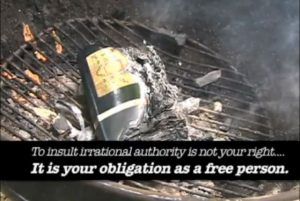 Well, we saw that in Greece rumours of a ‘desecrated koran’ caused a week or more of rioting. I’m sure all of us can remember the Danish cartoon riots despite the best efforts of world media to downplay them and not reprint the Danish cartoons hoping to avoid an escalation of the riots. I think now the facts are clear. Mere rumours of desecration of a Koran can cause this sort of behaviour by Muslims. Therefore, the only logical course of action is to desecrate Korans everywhere as publicly as possible. Muslims only have so much energy and there is only so many of them. If the public of nations at least which are not yet over 50% Muslim start showing contempt for this nonsense by abusing symbols Muslims arbitrarily hold sacred (and it is arbitrary, many old Islamic books have images of Mohamed) then like the Catholic church before them, they will learn that this tactic will not work. The way to stop violent irrational response to any resistance to Islamic demands on our freedoms, is to treat those demands with utter contempt.

Secondly, it seems as if the airborne variety of Bubonic plague has surfaced in Tibet. China has quarantineda town of 10,000 h/t Gates of Vienna

From The Times Online:

An outbreak of pneumonic plague has killed two people in China and forced the quarantining of a town of 10,000 to halt the spread of one of the world’s deadliest and most contagious diseases.

The first victim, a 32-year-old herdsman, fell ill a day after burying his dog, which had died suddenly. Two days later the man was dead. Of the friends and relatives who attended his funeral in the ethnically Tibetan region of Ziketan, in western Qinghai province, 11 soon fell ill.

One man, 37-year-old Danzin, a neighbour of the first victim, died on Sunday. Investigating medical authorities soon established that all were infected with pneumonic plague.

Those with the disease are being treated in isolation in a local Tibetan hospital while all 10,000 residents of Ziketan have been quarantined.

Pneumonic plague is spread through the air and can be passed from person to person through coughing, according to the World Health Organisation (WHO). It is caused by the same bacterium that occurs in bubonic plague, the so-called Black Death, which killed an estimated 25 million people in Europe during the Middle Ages.

Vivian Tan, the Beijing-based spokeswoman for the WHO, said: “There have been sporadic cases reported over the years. We’re not surprised that it’s come up. We’re in constant contact with the authorities to make sure things are under control.”

China has eradicated the plague from most parts of the country but occasional reports surface of cases in remote western Tibetan areas where the disease is carried by rats and the marmots that live across the huge Himalayan plateau. Outbreaks can be caused when Tibetans eat an infected marmot or come into contact with fleas carried by rats. The local government has launched a campaign to kill rats, marmots and other possible carriers in the area of the latest outbreak.

One medical expert said that it was important for Tibetans to take care, when burying their meat in the ground for cooler storage, to prevent rodents from finding and infecting it. A food seller at the Crystal Alley Market in Ziketan said that authorities had instructed that homes and shops should be disinfected and residents should wear masks when they went out.

He said that 80 per cent of shops were closed and that prices of disinfectants and some vegetables had tripled. “People are so scared. There are few people on the streets. There are police guarding the quarantine centre at the township hospital but not on the streets.”

A woman resident said that police checkpoints had been set up in a 17-mile radius around Ziketan and that residents were not allowed to leave.