The Halimi Cover-Up
by Pamela Geller 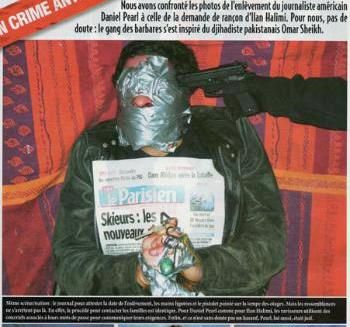 The abduction and murder in Paris of a young Jewish man by a gang of Muslim immigrants calling themselves the Barbarians shocked the whole of France in 2006. But now that the accused are on trial – silence.

A French judge has ordered the latest issue of the magazine Choc (“shock”) removed from the shelves. The cover showed a man with duct tape completely covering his head, except for a small opening around his nostrils. His His hands are also bound with duct tape.

It was a photo of Ilan Halimi, the 23-year-old Parisian Jew who was kidnapped and tortured for 24 days by the Barbarians. His captors took the picture and sent it to his family. A lawyer for Halimi’s family had complained about the magazine, but Choc’s editor-in-chief Paul Payan responded: “Of course, we understand the anguish of the parents and, of course, we share their anguish…. But what’s so harrowing is not the publication of this photo. What’s harrowing is what it represents, And it gets worse. The New York Times reported last week that “in the two and a half weeks since 27 people went on trial [in Paris] for the brutal 2006 kidnapping, torture and killing of a young Jewish man, little has filtered out about the proceedings.” Worse still, the little that has emerged indicates that French government and law enforcement have done everything in their power to obscure the Islamic Jew-hatred that led these Muslims to commit this crime.

The corrupt media, aligned with the jihad forces, has long blacked out the truth about Halimi’s homemade concentration camp and the inconceivable horrors that were suffered by this French Jew, chosen by Islam’s soldiers for unimaginable torture. They covered up the religious aspects of this depraved barbarity. Law enforcement did as well.

No one said anything about the Koran’s statement that the Jews are the Muslims’ worst enemies. No one referenced Muhammad’s words: “The Hour will not be established until you fight with the Jews, and the stone behind which a Jew will be hiding will say, ‘O Muslim! There is a Jew hiding behind me, so kill him.'” Never was there heard anything about the Islamic tradition that says: “When judgment day arrives, Allah will give every Muslim a Jew or Christian to kill, so that the Muslim will not enter into hell fire.”

Ilan’s uncle, Rafi Halimi, reported that “the gang phoned the family on several occasions and made them listen to the recitation of verses from the Koran, while Ilan’s tortured screams could be heard in the background.”

Three weeks of unimaginable torture. Three weeks. So many clues. So many guilty animals partaking in the continuing torture in their “homemade concentration camp.” Twenty-three people participated in torturing Ilan. Another twenty were involved indirectly. The custodian of the building gave them the key to an apartment where they said they wanted to “keep someone.” French journalist Guy Millière reported that “the screams must have been loud because the torture was especially atrocious: the thugs cut bits off the flesh of the young man, they cut his fingers and ears, they burned him with acid, and in the end poured flammable liquid on him and set him on fire.”

Horrible tortures. Horrible torturers. One of the torturers would go to work at a TV station every day and come back to partake in the torture. The girls who lured Halimi into the trap knew he had been kidnapped. They knew Youssef Fofana, the leader of the Barbarians, was extremely violent. They knew Ilan was still in his hands three weeks later. All they had to do was make an anonymous phone call to the police. No one would have known. They did not do it. No neighbor thought to say to the police that something strange was going on in their building.
The Jewish community was not warned when prior attempts to kidnap Jewish men had failed.

Even the one member of the gang who dropped out because he was shocked by their violence did not call the police.

When Ilan was found, the head of the fire department who was called to the scene, a man with decades of experience, almost fainted when he saw the victim. The last thing Youssef Fofana did was slit Ilan’s throat, twice, and pour a flammable liquid on him to try to set him on fire. But this did not burn him to death, because Ilan walked for perhaps one hour, trying still to find a way to live.

It was another brutal Islamic slaughter of a defenseless Jew. To cover it up now is only to help ensure that it happens again.