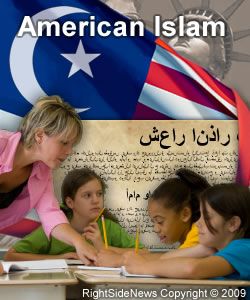 Did you know that Muslims discovered America? Or that “ancient Jewish civilization contributed very little to the arts and sciences”?

According to a recent study by Institute for Jewish and Community Research, millions of American public school students in all 50 states use textbooks that contain such erroneous “facts.” Of the 500 historical errors uncovered by the study, hundreds of them tout a blatant agenda of Islamic superiority.

Even more shockingly, U.S. taxpayers are the ones footing the bill. It’s all part of a worrisome trend within the American educational system: the apparent spread of radical Muslim propaganda under the guise of “education.”

Pamela Geller has reported on the story for years. She says that the influence of radical Islam spreads beyond K-12 into colleges and universities.

“No one knows how extensive Saudi funding of U.S. schools is,” Geller told RightSideNews, “but since Saudis control 80% of US mosques financially, it’s very likely that they control the same percentage of schools.”

She cites “$20 million dollar gifts from Saudi Prince Alwaleed bin Talal, to top U.S. universities like Harvard and Georgetown,” adding that the impact of such gifts flows all the way “down to the kindergarten level.”

Under Title VI of the 1965 Higher Education Act, Harvard and seventeen other universities only qualify for special funding provided they conduct “outreach” to K-12 teachers, helping them shape lesson plans. And naturally, those lesson plans include laudatory information about Islam and the Middle East…

In one notorious instance, outraged parents protested in 2002 when they discovered that their children were learning about Islam in a California public school by praying “in the name of Allah.”

As one parent, who also happened to be a teacher in the same Byron Union District, was quoted as saying, “Can you imagine the barrage of lawsuits and problems we would have from the ACLU if Christianity were taught in the public schools? But when it comes to furthering the Islamic religion in the public schools, there is not one word from the ACLU, People for the American Way or anybody else. This is hypocrisy.”

Similar “acting Muslim” projects and programs have been reported in public schools in Texas, Florida and New Hampshire.

Daniel Pipes has been following this development for some time, looking at instances in which adding Arabic language instruction to public school curriculula has raised concerns about a hidden agenda of covert “Islamization”.

Not surprisingly, some charter schools Pipes investigated have ties to dubious groups and individuals. For example, the International Academy in Columbus, Ohio had connections to radical CAIR activists. (Reporting on that same school, Patrick Poole observed that most of the students were Somali refugees – who were now, tragically, being instructed by the same variety of radical Muslims their parents had come to America to escape.)

Another Islamic school Ohio, the Sunrise Academy, boasts an unindicted co-conspiracist in the first World Trade Center bombing as one of its star fundraisers.

“Without having done an exhaustive study, I would say that the high-profile controversies over schools in New York and Minnesota have somewhat set back the hitherto steady growth of Islamist influence in US public schools. But I expect this to be only temporary; given the resources and passions that the Islamists bring to this cause, their influence will grow over the longer term.”

Speaking of “high profile controversies,” the Islamic Saudi Academy in Fairfax, Virginia has been in the news recently, due to their plans to expand their campus.

Pamela Geller says the Saudi-funded Academy, “has been investigated for teaching hate [against Christians and Jews]. They promised they would revise their [text]books. They used white-out and called it revision.”

Even more troubling is that fact that one of the Academy’s graduates was convicted in 2005 of plotting with al-Qaida to assassinate President George W. Bush.

“Concerned parents came out and fought on an unlevel playing field. The Saudis jammed the hearing with 600 Muslim ‘supporters.’ Parents that spoke were heckled and jeered.”

Geller says the proposed expansion will proceed as planned. This, in spite of outspoken opposition from everyone from local taxpayers to columnist Cal Thomas, who wrote boldly: “One would be hard-pressed to find a greater threat to public health, safety and welfare than this training ground for a new generation of jihadists.”

Despite the endless and seemingly futile  battle against these schools, Geller insists that “we must fight back. But non- Muslims are so misinformed, they barely take notice until it hits home. You can talk and you can talk and you can preach to people, but in the final analysis, people have to feel it on their bodies and in their daily lives.

“The leftist/Islamic alliance is well organized,” adds Geller. Like them, “We need structure. We need organizations. We must stand up to this and expose the real objective of Islamic supremacism.”

One Reply to “Islam in America, Part Six: Education. By Kathy Shaidle”