Wow. Nobody saw this coming. Did we? 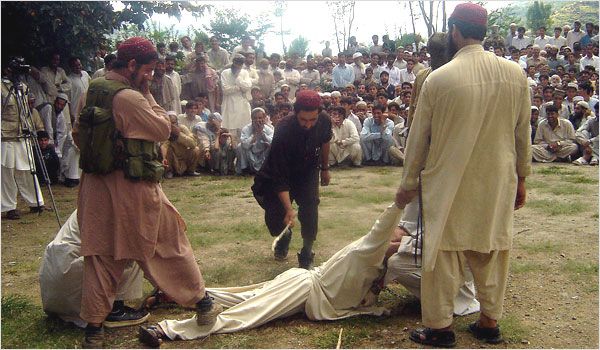 ISLAMABAD (Reuters) – Pakistani Taliban are imposing their rule in a Pakistani mountain valley they took over last week, spreading fear in the area only 100 km (60 miles) from the capital, police and residents said on Monday.

Surging militant violence across Pakistan and the spread of Taliban influence through the northwest are reviving concerns about the stability of the nuclear-armed U.S. ally.

Pakistan is crucial to U.S. efforts to stabilize neighboring Afghanistan but the government has been unable to check militant attacks in its cities let alone stop insurgents crossing into Afghanistan from border strongholds to battle Western forces.

Clashes erupted in Buner district last week after scores of Taliban moved in unopposed from the neighboring Swat valley, where authorities struck a deal with Islamists in February to enforce Islamic law in a bid to end violence.

Buner residents formed a militia, or “lashkar,” to resist the militants and 13 people, including eight Taliban, three policemen and two villagers, were killed in clashes.

Authorities say they are negotiating with the militants to persuade them to withdraw but the Taliban have stayed put and appeared determined to take over the valley, police said.

“They are everywhere,” Arsala Khan, a deputy superintendent of police, told Reuters by telephone from Buner.

“Buner is fast turning into Swat.”

Swat, to the west of Buner, was one of Pakistan’s main tourist destinations until 2007 when militants infiltrated into the North West Frontier Province valley from strongholds on the Afghan border to support a radical cleric.

Authorities agreed to an Islamist demand for Islamic sharia law in Swat in February to end the fighting but critics said appeasement would only embolden the militants to take over other areas.

“There’s panic all over,” said ethnic Pashtun tribal elder Fateh Khan. “If the Taliban don’t leave there will be more fighting, there might be a military operation. If that happens, who will lose? Only us.”

The spread of the Taliban has alarmed many Pakistanis.

Many people were horrified when video footage emerged this month showing Taliban beating in public a teenaged girl accused of having an affair. U.N. Secretary-General Ban Ki-moon denounced the flogging as “unacceptable.”

But the government’s support for the United States is also deeply unpopular, with many Pakistanis seeing militant violence as a result of that alliance.

President Asif Ali Zardari, who has vowed to stand up to the spread of militancy, is facing pressure from both conservatives and liberals over the issue of sharia law in Swat.

He has yet to sign into law a bill imposing it in the valley and the president’s aides have said he would only sign when peace returned to the valley.

But conservatives and the main political party in the northwest, who support the law as the only way to bring peace, say he is delaying because of liberal and U.S. opposition.

Acting on Zardari’s advice, the government has referred the bill to parliament which was due to debate it later on Monday.