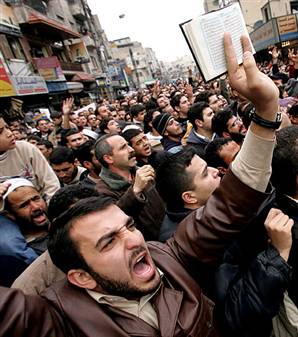 With less than six months to go until Norway’s general election, increasing tensions over immigration and Islam appear likely to play a significant role in the vote.

The leader of the country’s main opposition party has warned that it is facing “sneak-Islamisation”, while some prominent Muslims say they face growing “persecution”.

The heated debate is a sign that Norway, renowned as one of the most peaceful and tolerant nations in the world, is facing the same issues with its Muslim minority as are now familiar in other parts of Europe.

Siv Jensen, the 39-year-old leader of the opposition Progress Party, has objected to moves to introduce special measures in order to accommodate Muslims’ religious sensitivities, traditions and rules.

“The reality is that a kind of sneak-Islamisation of this society is being allowed,” she recently told a Progress Party conference. “We are going to have to stop this.”

Opinion polls suggest the party could win as much as 30% of the vote in the election for the national parliament, the Storting, in September.

“If the Progress Party gets to govern Norway, we will enforce Norwegian law and Norwegian rules. We are not going to allow special demands from any single group in society,” Ms Jensen added. END_OF_DOCUMENT_TOKEN_TO_BE_REPLACED