This week’s stories remind us once again of how ‘old fashioned’, rational thought is being replaced by ‘progressive’, irrational ideology. The Loony Left in its mission to create a better, more thoughtful world continues to cast aside what they consider the useless notions of public consultation, debate and majority consent in favour of their gentler, wiser, dictatorial approach. Initially we at vladtepesblog were reluctant to post these stories, as we felt they may provide more data for the social engineers of our cities to expand their role of government interference in our personal choices and anything else enjoyable. Quickly concluding they will rail on regardless, we got over it. Enjoy.

#1 From Spain  Animal Rights Groups Condemn Bullfighting in Film. Animal right’s activists are urging cinema goers to boycott the new film Manolete accusing the picture of glamorizing the role of the matador. Alliance Anticorrida, a French anti-bullfighting group, has sent a message to it’s 20,000 members urging them to avoid the film stating, “it is inadmissible to release a film in which the hero is a matador”. The joint British-Spanish production follows the life and death of Manolete, the legendary bullfighter. The film’s producers have tried to reassure activists that the story is about love, not killing, but their claim has fallen on deaf ears. It is worth mentioning that no real bulls were used during production.

#2 From England  Council Set to Ban Word ‘Obesity’. Liverpool City Council believes the word ‘obese’ could stigmatize youngsters and wants to replace the word with ‘unhealthy weight’. In a bid to avoid offending overweight children, the words obese and obesity would be dropped from all schemes and strategies aimed at improving children’s diets and health. But the plan is opposed by anti-obesity campaigners who feel that although the word carries a negative connotation, it could prove useful in addressing the seriousness of the problem. Tam Fry, chair of the obesity prevention charity Child Growth Foundation, maintains that school children must be taught the realities of life, stating, ” if your obese, you’re obese”.

#3 From Canada  Noise Violations May Prompt Fines. Ottawa City Council’s Community and Protective Services Committee has approved a proposal by councilor George Bedard which would see charges and fines levied against the hosts of loud parties. Councilor Bedard said that the city’s current way of handling noise complaints is ‘ineffective’, stressing ” we need to address this in a more efficient manner”. As it stands, staff who receive a complaint are directed to phone the residence and ask that the noise stop, usually ending the problem. Despite this, legal officials and police will be consulted and staff will report on their recommendations including possible noise bylaw amendments which would see hosts or their landlords who partake in or allow ‘noisy’ parties charged and/or fined. (Good thing Bluesfest has moved out of Bedard’s neighbourhood).

#4 From The U.K. Butcher Banned From Using Knives. A Sainsbury’s customer was stunned to learn that his butcher has been banned from de-boning a joint of lamb in case he cuts himself using a knife. Despite the fact that the butcher has been successfully chopping meat for 30 years and teaches young colleagues the art of meat dressing, he is forbidden from cutting lamb joints for his ‘own safety’. The embarrassed butcher said he simply couldn’t do it as he was not insured. A spokesman for Sainsbury’s market said ” Our colleagues who work on the meat counters are trained to use knives, but some have not received all the training to safely de-bone a lamb joint”.

#5 From The U.K. Great Grandmother Banned From Eating Cookie in Shop. An 86 year old great grandmother was threatened with security and banned by Marks and Spencer staff from eating a cookie inside their shop. Thelma Williams was confronted by security guards after she was caught eating a chocolate chip biscuit which she had purchased earlier from the store’s food section. Staff informed Mrs. Williams that she was not allowed to eat food bought outside the cafe, even if it was bought from the store with one employee telling her ” you’ve got to put that cookie away now or you might expect a heavy fine”. 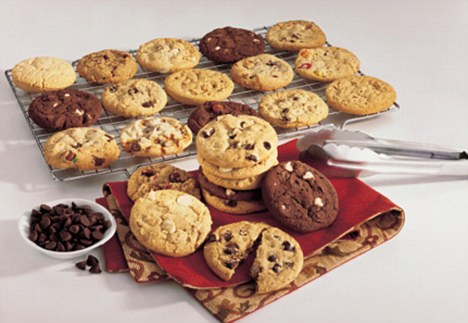 Chocolate chip cookies: Mrs Williams wanted to enjoy one of her biscuits with her tea after having lunch in the M&S cafe.
They then called security. Shaken by the incident and left feeling like a common criminal, Mrs. Williams, her daughter and two grandsons left the store. A spokesman for Marks and Spencer stated ” we are sorry for any distress caused to the customer. Mark’s and Spencer’s policy is that M&S cafe customers should only consume items bought within the cafe area. We are investigating the circumstances surrounding this matter”.
*** and the story we almost forgot….****
From Northern Ireland.  Green Party Plans to Ban Fox Hunting. The Green Party of Northern Ireland is poised to introduce a bill that would put an end to fox and stag hunting along with hare coursing. A key principle of the Green Party Northern Ireland states that ” the impact of society on the environment should not be ecologically disruptive”.  GPNI assembly member Brian Wilson said ” Legislation banning the hunt of wild mammals with dogs already exists in England, Wales and Scotland, so this bill will bring Northern Ireland in line with the rest of the U.K.”. A group known as Rural Ireland Says Enough (RISE) opposes the plan and led a 5,000 person strong protest through Waterford, fronted by six riders on horseback. A constitutional challenge to the controversial Hunting Act (2004) has already been dismissed by the courts. Similar legislation deeply polarized rural and urban Britain, prompting impassioned demonstrations on both sides of the debate with both continuing to be at odds.