It would seem from this report that the women in question were killed in a separate location than the other murder victims. One may assume from this that their deaths were preceded by torture and rape as is the Islamic custom when dealing with Infidel women. 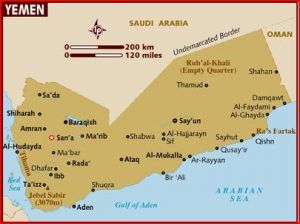 SAN’A, Yemen —  Nine missing foreigners in Yemen have all turned up dead, a Yemeni official said Monday, apparently executed by their kidnappers in the impoverished nation in the Arabian peninsula.The nine foreigners, including seven German nationals, a Briton and a South Korean, disappeared last week while on a picnic in the restive northern Saada region of Yemen.

The official, who spoke on condition of anonymity because he was not authorized to speak to the press, announced the discovery of the remaining six bodies Monday after three others had been found mutilated earlier in the day.Yemeni authorities said the group included a German doctor, his wife and their three children, as well as a Briton and his South Korean wife and two other German nationals. They were all working in a hospital in Saada, the state news agency said.

Yemen, the poorest nation in the Middle East, is home to restive tribes, a Shiite rebellion, as well as a branch of Al Qaeda which operates in its remote regions and has often targeted foreigners as well as the U.S. embassy.

Shepherds roaming the area found the the remains of three of the women in the mountainous northern Saada province near the town of el-Nashour, known as a hideout for Al Qaeda militants, the official said.

South Korea’s Foreign Ministry identified their national by her family name, Eom, and said she is a 34-year-old aid worker in Yemen.

Chantel Mortimer, the press officer at the British Embassy, expressed concern and said that the embassy is seeking information about the rest of the hostages including the British one.

“We are very concerned that bodies were found. We are seeking further details,” she said.

The killing of hostages is not common in Yemen, where tribesmen often kidnap foreigners to press the government on a range of demands, including a ransom, but usually release them unharmed. Kidnapping involving Al Qaeda, however, have been lethal for the hostages in the past.

A tribal leader in the area, who also spoke on condition of anonymity for the same reason as the security official, blamed Al Qaeda for the Friday abduction and the killing.

Earlier, the Yemeni government had accused a Shiite rebel group in Saada, led by Abdel Malak al-Hawthi, but the group issued a statement saying it has not been involved in any abductions of foreigners.

Yemen, the ancestral homeland of Al Qaeda leader Usama bin Laden, had long been a haven for Islamic militants and was the scene of the October 2000 homicide bombing of the USS Cole that killed 17 American sailors.

Yemen is also the Arab world’s poorest nation — and one of its most unstable — making it fertile territory for Al Qaeda to set up camp.

3 Replies to “Murder most foul in Yemen”