For any Muslim to acknowledge Israels right to exist goes against all they are taught. The Qu’ran and Islamic scholars have made it very clear that it is the duty of Muslims to terrorize and kill Jews where ever they are found. Peace with Israel/Jews is un-Islamic and blasphemy. 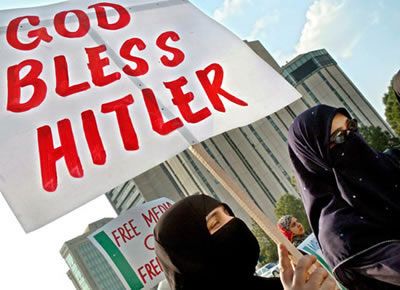 Egyptian President Hosni Mubarak says an Israeli demand that Palestinians accept Israel as a Jewish state ruins the chances for a peace deal.

The demand was one of two conditions set by Israeli Prime Minister Benjamin Netanyahu as he backed the creation of a Palestinian state for the first time.

He also asked that a Palestinian state be demilitarised. Palestinians have rejected the conditions.

The US has called Mr Netenyahu’s stance an “important step forward”.

The EU said Mr Netanyahu’s comments were a step in the right direction, but not enough to raise relations with Israel to a higher level.

Egypt was the first Arab state to recognise Israel and a key mediator in Middle East peace negotiations.

Mr Mubarak said on Monday that he had told Mr Netanyahu that peace talks should be resumed.

“I have also told him loud and clear that the call for recognising Israel as a Jewish state would complicate matters and abort the chances of peace,” the state-run Mena news agency quoted Mr Mubarak as telling military officials.

“I even warned him that this particular call would not be met by a favourable response from Egypt or beyond.”

The Egyptian foreign ministry said it would continue to support US and international peace efforts, but that “the vision which the Israeli prime minister presented… is flawed and lacks many elements.”

Mr Mubarak was responding to Mr Netanyahu’s speech on Sunday in which he endorsed a Palestinian state for the first time.

In the speech, weeks after US President Barack Obama urged him to agree a two-state plan, Mr Netanyahu said the Palestinians must accept Israel as a Jewish state.

He said a Palestinian state must have no army, no control of its air space and no way of smuggling in weapons.

A Palestinian official has said the Israeli prime minister’s conditions for a two-state solution “paralysed” the peace process, while a Hamas spokesman in Gaza called on Arab nations to “form stronger opposition” towards Israel.

Recognising the Jewish nature of the Israel state would in effect mean that they will have to forgo one of their key demands: a negotiated settlement for the problem of the Palestinian refugees – those who either fled or were forced to leave their homes when Israel was established in 1948.

He adds that Israel regards the return of refugees as tantamount to the destruction of Israel as a state with a Jewish majority.

But the issue of the Jewish nature of Israel is arguably far more objectionable to the Palestinians who live inside Israel, otherwise knows as Israeli Arabs, he says.

They are opposed to defining Israel as a Jewish state, because they fear that, in their eyes, such a move would make them into second class citizens not only de facto but also de jure.

In Israel, Mr Netanyahu’s words have drawn criticism from the left for not going far enough and from his own right-wing coalition for going too far.

A White House statement said Mr Obama believes a solution “can and must ensure both Israel’s security and the fulfilment of the Palestinians’ legitimate aspirations for a viable state, and he welcomes Prime Minister Netanyahu’s endorsement of that goal”.