From the “serves you right” files comes this. At least this story will remind Americans that Muslim fanatics are actively recruiting U.S. citizens to join forces with those groups that are or support and collude with enemies of the state. 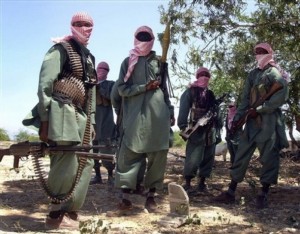 Mike Irvine FOX NEWS  A Minnesota man recruited to join an Al Qaeda-linked terrorist group overseas may have been assassinated in Somalia by the very terrorist group he went there to help.

The Federal Bureau of Investigation has been investigating for several months at least 20 Somali-American men from the Minneapolis area who recently traveled to Somalia to train with the terrorist group al-Shabaab.

One of those men — 17-year-old Burhan Hassan — was killed in Mogadishu on Friday, his uncle, Osman Ahmed, told FOX News.

“Someone who claimed (to be) a member of al-Shabaab called Burhan’s mom Friday (afternoon) and said Burhan died Friday morning,” Ahmed said. “Burhan’s mom got shocked and (threw) the phone when she heard the story.”

“Al-Shabaab assassinated Burhan and shot (him in) the head,” the individual said, according to Ahmed.

A law enforcement official told FOX News on Sunday that one of the Somali-American men was recently killed in Somalia by artillery fire, but the official declined to release the man’s name.

“My sister still is under shock,” Ahmed said.

Ahmed added that he and his family last heard from Hassan two weeks ago.

“That time he was sick, and he couldn’t talk that much,” he said. “He called his family and Burhan’s voice was very weak, and then (a friend with him) … told the family Burhan was sick a while and having malaria.”

Hassan was a senior at Roosevelt High School in Minneapolis when he left for Somalia.

“(He) was a brilliant student with straight A’s and on top of his class,” Ahmed testified at a Senate hearing in March focusing on recruitment efforts by al-Shabaab. “He was an ambitious kid with the hope to go to Harvard University to study medicine or law and become a medical doctor or a lawyer.”

Ahmed accuses a local mosque of helping al-Shabaab recruit his nephew and others in the Minneapolis area.

“Like his peers, Burhan Hassan was never interested in Somali politics, or understood Somali clan issues,” Ahmed said during testimony. “These kids have no perception of Somalia except the one that was formed in their mind by their teachers at (a local mosque). We believe that these children did not travel to Somalia by themselves. There must be others who made them understand that going to Somalia and participating the fighting is the right thing to do.”

Hassan is the second known American to die alongside al-Shabaab, which has been warring with the moderate Somali government since 2006.

In October 2008, 27-year-old college student Shirwa Ahmed of Minneapolis became “the first known American suicide bomber” when he blew himself up in Somalia, killing dozens, according to the FBI.

A source familiar with the FBI investigation told FOX News in March that “several” of the men who went to Somalia had returned to the United States, while others “are still there (in Somalia).”