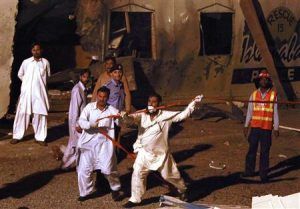 ISLAMABAD (Reuters) – Villagers in northwest Pakistan have attacked Taliban militants killing seven of them in revenge for a bomb attack on a mosque that killed at least 40 people, a top government official and residents said on Sunday.

It was the latest in a series of instances of people turning their guns on the Taliban in recent weeks and trying to force them out of their areas and will encourage the Pakistani government which needs public support to defeat the militants.

The United States, which needs sustained Pakistani action to help defeat al Qaeda and cut off militant support for the insurgency in Afghanistan, will also be heartened by the move.

The Pakistani military has been battling Taliban in the Swat valley, northwest of the capital, for more than a month after the militants took advantage of a peace pact to gain new ground.

The army offensive has broad public support even though many in Pakistan are ambivalent about the Taliban and are wary of the government’s close alliance with the United States.

Taliban militants have also launched a string of bomb attacks in response to the military offensive and are suspected of being behind a suicide bomb attack on a mosque in the Upper Dir region, near Swat, that killed about 40 people on Friday.

After the blast, enraged villagers formed a militia, known as a lashkar, of about 500 men to expel the militants from the area, said the top government official in the region.

“They are standing up against the militants themselves as they consider them troublemakers,” the government administrator, Atif-ur-Rehman, told Reuters by telephone.

Alarmed by the prospect of nuclear-armed Pakistan drifting into chaos, the United States had criticized a February peace pact with the Taliban in the former tourist valley of Swat as tantamount to abdicating to the militants.

“THEY HAVE TO GO”

One resident of Upper Dir said the militia had demolished houses where Taliban were known to stay.

“We are Muslims, we pray regularly and read the Koran. We don’t want them, they have to go,” resident Samiullah Khan said by telephone. “Attacking a mosque is not Islam. They’re not Muslim.”

“It means inviting a military offensive which we don’t want. We know how to defend our land,” Khan said.

The military says it has snuffed out “organized resistance” in Swat and would conduct operations on a “limited scale” to destroy militant hideouts and run their leaders to ground.The military says more than 1,200 militants and about 100 soldiers have been killed since the army began the offensive. There has been no independent confirmation of the casualties.

Rehman said the village militia had cleared the Taliban out of three villages and had surrounded a group of militants.

“This is better than military action because they know their hideouts,” Rehman said. “The fighting is going on and hopefully the rest of the villages will be cleared in two or three days.”

Pakistan rejects U.S. and Afghan complaints that Afghan Taliban operate on the Pakistani side of the border but say some Afghan Taliban do slip through.