Two stories, probably unrelated but I felt I should point these two events out as if I thought of it someone else will and you may as well read it here and decide for yourself if it has any meaning. The first, a story from NM where two people have died of the Bubonic plague. Plague is not unheard of in the US. In fact, plague appears in a few spots around the world, including Algeria, where the second story comes from. An Al-Queda cell in Algeria last year is rumoured to have weaponized the plague for use as a terrorist bio WMD. That something like forty Al-Queda members died at the same time of the Black Plague is not a rumour but confirmed fact. That Al-Queda was weaponizing the plague is not confirmed but not denied. The connection between these two events I leave up to you. 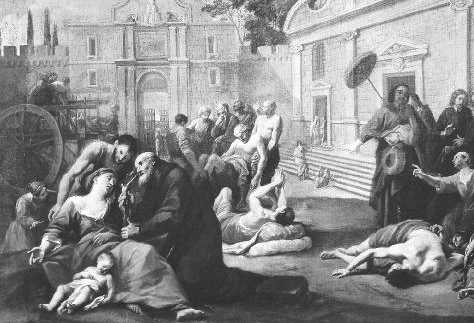 ALBUQUERQUE, N.M. —  An 8-year-old New Mexico boy has died and his 10-year-old sister was hospitalized after both contracted bubonic plague, the first recorded human plague cases in the nation so far this year.

New Mexico health officials did not immediately say Thursday how the brother and sister contracted the infectious disease, but they are conducting an investigation at the family’s residence to determine if there is any risk to other people.

Plague is generally transmitted to humans through the bites of infected fleas, but also can be transmitted by direct contact with infected animals, including rodents, rabbits and pets.

Symptoms of the bubonic form of the plague in humans include fever, chills, headaches, vomiting, diarrhea and swollen lymph nodes in the groin, armpit or neck areas. Pneumonic plague, which is an infection of the lungs, can include severe cough, difficulty breathing and bloody sputum.

The Health Department, citing privacy concerns, would not release the name of the siblings or give a location for their home, other than saying it was in Santa Fe County. Spokeswoman Deborah Busemeyer said the boy died in the last couple of days but she declined to be more specific.

Fleas collected from the area are being sent to the Centers for Disease Control and Prevention for testing. Health workers also canvassed the neighborhood to tell other residents that plague had been confirmed in the area.

The CDC says an average of 10 to 15 persons contract the plague each year in the United States. Modern antibiotics are an effective treatment.

——————————- Stories below go from earliest to latest. I have only put a paragraph or two of each here, you may want to click each link and read the articles in full.

For the ‘maybe there is a god’ file an Al Queda training base is hit with bubonic plague. forty die and many more give themselves up as martyrdom suddenly didn’t seem nearly as good as it did before they got sick. Apparently even the fear of waterboarding is nothing compared to the rapid painful death of the black plague.

Algeria is one of the many areas where plague occurs naturally, and the country experiences periodic outbreaks of the disease. In 2003, there was an outbreak of plague in Algeria’s Oran province. In that outbreak, there were 11 confirmed and seven suspected cases of plague. All the cases in that episode were bubonic, indicating it was likely spread by fleas.

That said, it is possible that AQIM members were experimenting with plague as a weapon, and plague could be employed on a limited scale by infecting some suicide operatives with pneumonic plague and then sending them around to hopefully cough or sneeze on victims, or perhaps to release some infected fleas against a target area. However, either scenario is unlikely to produce mass casualties. Y. pestis might be effectively delivered against a smaller number of people. The early symptoms of pneumonic plague can be mistaken for the flu, and if the victims do not seek immediate medical attention the disease can be fatal.

The report that some forty al-Qaeda terrorists died after the bubonic plague swept through their Algerian training camp has been treated with some glee in the media. But that schadenfreude may be misplaced. One question being investigated is whether the North African fanatics fell victim to the naturally-occurring pathogen or the possibility the group mistakenly released the killer bug while brewing it for terror attacks. This incident provides the Obama administration the impetus to assess whether our nation is prepared for a bioterrorist attack.

The Algerian terrorist franchise, al-Qaeda in the land of the Islamic Maghreb (AQIM), is the largest al-Qaeda group outside the Middle East. AQIM has a deadly terrorism record and a declared intention to attack American targets which makes the potential bioterrorism threat credible but not a surprise for American experts.

On Monday, the Sun ran a story reporting that 40 terrorists from AQIM had died of plague in a terrorist training camp in Tizi Ouzou. Yesterday, Eli Lake from the Washington Times confirmed through one of his source in the U.S. intelligence community that an incident had taken place at a training camp that had to be shut down as a result. The deaths were not confirmed though.

A few observations at this point that give credence to this story, which has not received the coverage it deserves:
1- There has been a total black out from the Algerian media that has not even mentioned one line about this story.