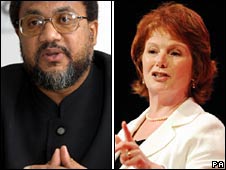 Dr Abdullah has in turn accused Ms Blears of “crude bullying”. He said the declaration did not represent an attack on Jewish people and that he did not call for or support attacks on British troops anywhere in the world.

After the legal action was launched a spokesperson for the Department for Communities and Local Government confirmed it had received correspondence from Dr Daud Abdullah’s solicitors.

“We have been in dialogue with the MCB since 6 March, seeking clarification of the actions taken by Dr Abdullah in relation to the serious issues raised by the articles in the Istanbul Declaration.

“We are concerned with those articles which appear to call for violence and Dr Abdullah’s repeated unwillingness to distance himself from those articles specifically.

“The legal route that Dr Abdullah has chosen to take despite our offer of further private dialogue with the MCB to resolve the matter means this will now be taken forward by solicitors.”

The UK government has said it is concerned with the following articles of the declaration:

• “The obligation of the Islamic Nation to regard everyone standing with the Zionist entity, whether countries, institutions or individuals, as providing a substantial contribution to the crimes and brutality of this entity; the position towards him is the same as towards this usurping entity.”

• “The obligation of the Islamic Nation to regard the sending of foreign warships into Muslim waters, claiming to control the borders and prevent the smuggling of arms to Gaza, as in effect a declaration of war, a new occupation, sinful aggression, and a clear violation of the sovereignty of the Nation, that must be rejected and fought by all means and ways.”

“What I do advocate is the right of all British citizens to agree or disagree with government policy and to use all lawful means to democratically make their voices heard.

“A government which tries to suppress discussion of such views by the kind of crude bullying to which Hazel Blears unfortunately stoops will have little moral support, not only in the Muslim community, but in wider society,” he added.

Last week a Labour MP and two of the party’s peers were among co-signatories with Dr Abdullah of a public statement insisting they did not “condone, encourage or support” killing any human beings or attacks on British soldiers.

Ms Blears said at the time that the statement was a “helpful first step” but that “greater clarity” of Dr Abdullah’s views was needed.

She said she stood by what she believed about the declaration.

“Public statements that assert that attacks of this kind are not only acceptable but an ‘obligation’ cannot go unchallenged,” she said.

She denied Dr Abdullah’s claims that she was trying to “suppress discussion”.