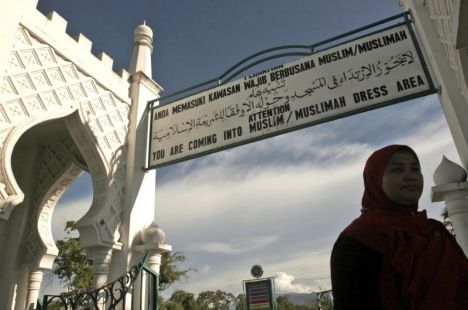 A woman walks past by a sign advising people to wear Muslim attire at Baiturrahman Grand Mosque in Banda Aceh. A local lawmaker says a controverisial bill allowing Shariah-style stoning and caning has gone into effect in the province. (Photo: Heri Juanda, AP)

Thanks to R.E.A.L. for informing us.

Indonesia… Banda Aceh. A controversial bill that includes a provision for the stoning to death of adulterers is now officially law, even without the signature of the Aceh governor, a local councilor said on Thursday.

The draft of the Qanun Jinayat Code, a set of bylaws that replaces elements of the Criminal Code with Shariah provisions for Muslims, was endorsed by the Aceh Legislative Council on Sept. 14.

The measures call for the stoning of adulterers and 100 lashes for anyone caught engaging in premarital sex, among its other punishments.

The ratification of the bill has been sharply criticized by human rights activists, and Governor Irwandi Yusuf reportedly refused to sign it into law.

Moharriadi Syafari, a councilor from the Muslim-based Prosperous Justice Party (PKS), said the main reason for the law was to “save” people in Aceh from acts not approved by religion.

“Human rights activists should not see the Qanun Jinayat from a narrow-minded perspective, as though it breaches human rights, because basically Islamic law has a high respect for human rights,” Syafari said.

He said the bill automatically became law 30 days after being endorsed by the council despite the governor’s refusal to endorse the measure. END_OF_DOCUMENT_TOKEN_TO_BE_REPLACED

Hat Tip to R.E.A.L   Ungaran, 14 October (AKI/Jakarta Post) – An Indonesian court has acquitted controversial Muslim cleric Pujiono Cahyo Widianto over child sexual molestation charges for marrying an underage girl, aged 12 last year. Widianto risked up to 15 years in jail, had he been convicted of the charges. Prosecutors said they would appeal the court ruling. The girl is his second wife.

After hearing the charges and the plea from the legal team of Pujiono alias Syech Puji, 43, led by top lawyer O.C. Kaligis, presiding judge Hari Mulyanto deemed the charges unclear and inaccurate, meaning the trial could not proceed.

“The defendant is acquitted of the charges and should be released from detention,” Hari told the trial at the Ungaran District Court, Central Java, which was open to the public.

Prosecutors had charged Pujiono, a wealthy brassware entrepreneur and owner of Miftahul Jannah Islamic boarding school in Jambu district of violating the 2002 law on child protection and article 290 of Indonesia’s Criminal Code on child molestation for marrying an underage girl, Lutfiana Ulfa, just 12 years old and still an eighth grader, in August, 2008.

“Jihad and terrorism are not something to be afraid of or avoided, because to cause terror to Allah’s enemies is the instruction of Islam,” said an article by the “Prince of Jihad” which appeared on Ar-Rahmah’s website after the hotel attacks.

The enemies of Allah are all those who do not admit he is the one God and that Mohammed was his prophet. About 75% of the Earths population.

NEWS.COM… INDONESIAN police are pursuing an al-Qaeda connection to the twin suicide attacks on Jakarta hotels, after confirming that a suspect in custody had been a follower of Osama bin Laden.

National police chief Bambang Hendarso Danuri said the suspect, Indonesian publisher and Islamist blogger Mohammed Jibril Abdurahman – known on the internet as the “Prince of Jihad” — was once a member of al-Qaeda.

Mohammed Jibril was arrested outside Jakarta late on Tuesday on suspicion of channeling money from abroad to finance the July 17 attacks on the JW Marriott and Ritz-Carlton hotels, which killed nine people including three Australians and the two bombers.

The blasts marked the bloody end of a four-year hiatus in such attacks in the world’s most populous Muslim country, and have been blamed on a terror network led by Malaysian extremist Noordin Mohammed Top.

Asked by reporters whether Mohammed Jibril had been a member of al-Qaeda, Danuri said “yes.”
“Let the process proceed, there will be more developments,” he said, without elaborating.

Noordin, 41, is the most wanted extremist in Indonesia and calls his group “al-Qaeda in the Malay Archipelago.”He allegedly received al-Qaeda backing for an attack on the Marriott in 2003 which killed 12 people, and is also accused of masterminding attacks on the Australian embassy in 2004 and tourist restaurants in Bali in 2005.

Police say they have killed three cell members and arrested five since July 17, including a Saudi national who allegedly smuggled money from abroad to pay for the operation. END_OF_DOCUMENT_TOKEN_TO_BE_REPLACED