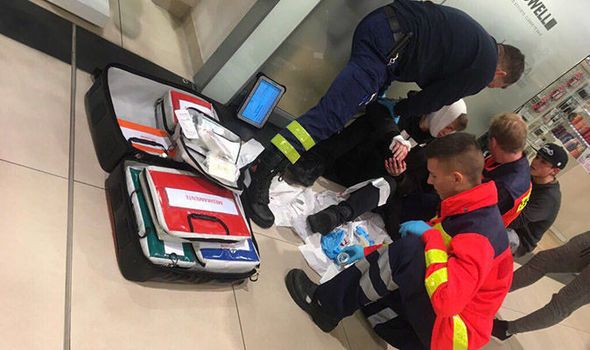 Cottbus. On Wednesday, another knife attack took place at Blechen-Carré in Cottbus. A Syrian youth wounded a 16-year-old from Cottbus. Police are still hunting for the perpetrator.
By Bodo Baumert

As police announce tonight, the incident took place just after 3 PM. The officers were alerted to a grievous battery at the street tram station Stadtpromenade. “According to first investigations, a brawl ensued after a verbal confrontation and an insult. From a group of Syrian and German youths between 16 and 18 years old, who superficially knew each other from school and leisure time, a 16-year-old boy from Cottbus was pressed against a standing tram by a Syrian youth”, says police spokesman Torsten Wendt. In doing so, a knife slash was inflicted upon the left side of the youth’s face. After the incident, the 16-year-old ran into Blechen-Carré, looking for help. “The victim was tended to by paramedics there and then taken to CTK hospital for further treatment”, says Wendt.

Police did not announce further details. Criminal Police took over investigations. A police search for the suspect, who is still on the loose, and his accomplices, is still ongoing. Several witnesses of the incident were already interviewed in the early evening hours.

Translator’s note:
In answer to Friday’s knife attack on the married German couple, one of the Syrian attackers, a 15-year-old, was expelled from the city of Cottbus and the whole parish, along with his father. The head of the municipal public order office stated that this was the first time ever the city has taken to this harsh measure, as the youth was already prior known for violent offenses: “We declare the integration of the youth a failure.”
Also, an attack by unknown perpetrators on a refugee accommodation was reported.
As a response to Friday’s stabbing, even before this new stabbing, police have already announced to increase their presence.

6 Replies to “Germany: Another Day, Another Knife Attack At Cottbus Shopping Center”