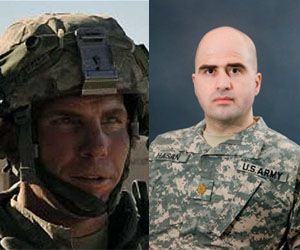 Two serving US soldiers go on gun rampages which result in the death of innocents.

Staff Sgt. Robert Bales is a veteran of three Iraqi tours and was serving on his fourth Afghan tour when he snapped. Throughout his career he has probably contributed to the saving of many, many Muslim lives. Twenty times the number of infidels (read, supposed comrades-in-arms) no doubt, that Major Nidal Hasan shot dead at Fort Hood.

Hasan is likely to seek a defense of “Post-Traumatic Stress Disorder” even though he, unlike Bales, has never seen active service. In contrast, Bales is to be charged with war crimes, which have irreparably inflamed Afghani/US tensions; whereas the Pentagon – at the White House’s insistence – has classified the Fort Hood massacre as “workplace violence”.

In other words while Hasan screamed “Allahu Akbar” as he pumped round after round into his colleagues, he was being no different than a disgruntled postal worker. And crucially, as this Fox News video confirms, the media has happily collaborated in “de-contextualising” the one case while insistently and pointlessly contextualising the other.

So in the desperate search for any “motive” that might explain these horrific incidents, the fact that Hasan had business cards on him saying, “Soldier of Allah” which he had printed up before his killing spree: is not deemed in the slightest bit relevant. But the fact that Bales sought a life in the Services after his business went belly-up over a decade ago? Ah there’s all the explanation you need…