Bruce Bawer recently published a book called, “The New Quislings: How the International Left Used the Oslo Massacre to Silence Debate About Islam”, and the title sums up what the Left has been doing since the tragic events of last summer. Literally trying to smear the blood of those poor Norwegian children on the faces of their political opponents, in order to silence any criticism of Islam, diversity or mass-immigration. 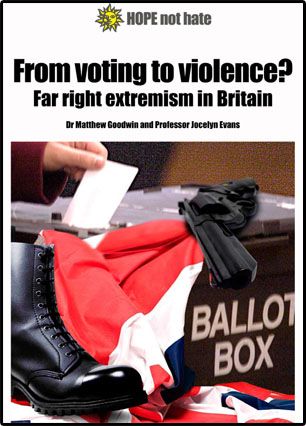 A good example of this was the release last week of a truly nonsensical report by two British academics, produced for the UK think-tank of the anti-Fa movement: Hope Not Hate. The report can be summarized briefly, accurately and without hyperbole: as an attempt to insist that anyone critical of multi-culturalism has a latent propensity to bloody violence.

The report’s cover-page (right), clearly an attempt to be chilling, comes across as cack-handed, risible, almost hilarious.

Here the social commentator of The Daily Telegraph, Ed West, delivers a detailed fisking to this piece of “research”.

There’s nothing extremist about rejecting the ‘benefits of diversity’

Imagine that a report came out linking people’s unease with inequality and poverty to extreme Left-wing violence of the Baader-Meinhof variety, showing that Labour voters shared some of the same concerns with supporters of the Communist Party or other Far-Left organisations.

Imagine it illustrated this report with a picture of a gun beside a red flag and jackboots, and pictures of Ed Miliband and Harriet Harman by pictures of Left-wing extremists. … So try imagining how the UK Independence Party must feel about the Hope Not Hate report, “Voting to violence? Far right extremism in Britain”, which lumps the group in with the British National Party and English Defence League in a study of Right-wing extremists.

The report was produced in response to a Home Office committee last year that declared that the risk of extreme Right-wing violence was underplayed and that there was a serious terror threat from these groups. The aim of this report, therefore, is to explore the intellectual hinterland from which these Right-wing extremists will emerge, for:

The report graphically highlights the central dominance of immigration and a fear of Islam to supporters of both the British National Party (BNP) and United Kingdom Independence Party (UKIP). This is despite the leadership of both organisations playing down their hardline views. …

There is a strange, almost quaintly unknowing quality about this worldview. UKIP and BNP supporters, the report argues, “are almost unanimous in their rejection of the notion that Britain is benefiting from diversity”.

And one would, of course, have to be literally insane to hold such a view.

Yet a report that defines “far Right” as someone who thinks that mass immigration is overall a bad thing has a bit of a problem. On Friday the Guardian reported that UKIP supporters had been included as a “control” group, but if that was the case, why not just compare these “far Right” views with those of the public in general? Because these “extreme” opinion are, in fact, mainstream. …

Last year’s HOPE not hate report showed that 63 per cent of white Britons, and almost half of Asians, believed that immigration had been a bad thing for Britain; presumably then some 40 per cent of British Asians are potential white supremacists. The report stated that half of the British population would vote for a “far-Right” party that did not promote violence. In fact their description of “far Right” was not far-Right in any traditional sense, that is being violent, anti-democratic, race-obsessed, territorially expansionist or violently hostile to women’s rights and gays; it was just one that rejected the “benefits of diversity” and wanted to restrict immigration. I love the unwitting humour of the logic here; we’re in the centre, everyone else is an extremist. …

Might it be that Hope Not Hate, and many of the other organisations fighting racism, have a rather skewed idea of what “Far-Right” and “extreme” is? Hope Not Hate does a lot of good work, but it seems stuck in a 1980s theory of anti-racism which confuses racial hatred with “parochial altruism”, that is the natural human feeling of being happier around people like ourselves, and so having discomfort with diversity; the former is the pathological variation of the latter, but the latter is part of human nature and not immoral or necessarily problematic. Anti-racism, which has its roots in the Utopian far-Left, holds that this universal feeling can be somehow indoctrinated out, just as the Soviets believed that our desire for financial self-interest could be bred out. …

The irony is that this report seeks to address peoples’ alienation from mainstream politics, and then characterises them as extremists. Is it any wonder that people feel so disconnected?

One Reply to “Dissecting an academic hit-job”