What if someone held a protest and (almost) nobody came? Would anybody hear it? 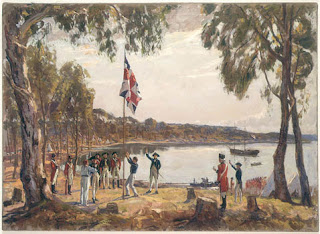 A protest action in support of the First Fleet has been called in Gunnedah, NSW for 2 June 2011. The protest is to be outside Gunnedah South Public School at 12 pm where a petition signing will take place.

The demonstration has been called in response to the principal Emma Jeffery refusing to accept a gift from the Morris family of a print of Algernon Talmadge’s “The Founding of Australia” which depicts the raising of the Union Jack at Sydney Cove by Captain Arthur Phillip on 26 January 1788.

Convenor Nigel Morris says his family have been attending the school since it first opened; his name and that of his 3 aunts, his father and two brothers are all engraved in commemorative pavers that were laid for the instituition’s 50th anniversary. He says his great great grandfather Fredrick Hunt was born in the town in 1873, and that two roads in the area carry the name of his people.

“To tell me they can’t accept our gift because the frame carries a plaque with the name the artist ascribed to his work is right out of this world”.

Mr Morris says he will seek a message of support from the local state MP Kevin Anderson.

I came across this a week ago, and found it quite astonishing that a school principal would refuse the gift of such a painting.

Apart from it being a nice painting, the occasion it commemorates is Australia Day. The day we celebrate the founding of our nation. This is not just any old day.

There are the usual activist ratbag elements who prate on about “Invasion Day” annually, and who call for the day to be scrapped (although I reckon they’d be happy to keep the public holiday) or the date to be changed.

After all, we can’t be celebrating the day our nation was actually, like, you know, founded.

For those not in the know, January 26th, 1788 was the day that the English flag was raised on the soil of what was then considered terra nullius, land owned by nobody and therefore open to all comers.

Captain Arthur Phillip, leading the First Fleet of 11 ships carrying convicts, soldiers, sailors and settlers, did the honours, and was our first Governor.

The black armband view of Australian history paints this as your standard evil, oppressive, Western colonialist takeover, even though there were other cultures doing exactly the same thing at the same time.

So Mr. Morris offers to his local primary school (Prep to Grade 6 – ages 5-12) a copy of the painting above.

Nigel Morris, a former student of Gunnedah South Public School, has had a copy of Algernon Talmage’s “The Founding of Australia” which he had donated on behalf of his family returned by the principal Emma Jeffery. The stated reason was that affixed to the wooden frame is a plaque inscribed with the title.

“I’m stunned. For the school to say it cannot accept my gift because it displays the name the artist attributed to his work is right out of this world”.

Mr Morris says he has written to the P&C association asking the members to make representations to the school executive to overturn the ban on the First Fleet and that he also plans to appeal to his local state member of parliament.

I emailed Ms. Jeffery myself and received no reply. Since I do note on correspondence that it may be published on my blog, she had notice that I might write about this.

On facebook this evening I was referred to a press release about your returning the gift of a painting to the person who donated it.

I want to write a blogpost about this, and would like to ask for your position on this matter.

The reason given for your refusal is that you objected to the title of the picture (The Founding of Australia. By Capt. Arthur Phillip R.N. Sydney Cove, Jan. 26th 1788).

There is now also a protest planned against your action, because it was seen as quite insulting by Mr. Morris.

This is of concern to me, down in sunny Melbourne, because I’m a descendant of a convict on the First Fleet (he was on the Scarborough), and rather proud of that. I tell my daughter that she has a strong history in this country, with her First Fleeter, and the miners who came over from a little village in Cornwall to land in Melbourne during the gold rush and then make their way to Clunes and beyond – all the way out to Kalgoorlie and Coolgardie for the mining.

My family has been in this country since 1788, and fought for it in two World Wars and Vietnam.

I suspect you will have children in your school who also have roots stretching so far back.

According to your school website, “..students learn about history, geography, civics
and citizenship. They investigate their personal and community identity, and gain an understanding of their nation and its place in the world. They learn to participate effectively in maintaining and improving the quality of their society and environment.”

Does this history not include an apolitical appraisal of the founding of our country? It is an established fact that the First Fleet landed. We can’t get around that.

I honestly don’t understand why such a painting would be seen as inappropriate in a school setting. From a viewer’s perspective it’s a good painting.

From an historical perspective, the subject matter is something that took place – Captain Arthur Phillip did land, and did raise the flag.

There is a lot of history that is not being taught in our schools – the founding of our great country is not a subject that should be neglected. Knowing where we come from is just as important as knowing where we are going.

If we don’t know who we are, then we cannot build that much-vaunted social cohesion that the politicians talk about.

Thank you so much for reading this far, and I hope to hear from you about this.

ps. please note that I do occasionally publish correspondence on my blog. If you would prefer that this remain in confidence, please let me know within seven days and it will remain so.

There has been a deafening silence from this principal, but I suspect she is only following the syllabus for students in New South Wales:

The development of values and attitudes underpins learning and teaching in Human Society and Its Environment. Values and attitudes related to social justice, intercultural understanding(pdf), ecological sustainability(pdf), democratic processes(pdf), beliefs and moral codes and lifelong learning are incorporated into the outcomes and content of this syllabus.

In addition to the learning experiences in this syllabus, it is recognised that school, class and community events and practices contribute to the development of knowledge and understandings, skills, and values and attitudes in Human Society and Its Environment.

The content presented in this syllabus is inclusive of all learners. It incorporates gender, Aboriginal, citizenship, multicultural, environmental, work and global perspectives, and encourages the inclusion of studies of Asia where appropriate. It also recognises the importance of concepts that will support
reconciliation between Aboriginal and non-Aboriginal Australians, such as the recognition of spirituality and shared heritage.

I’ve added a few links that I think are pertinent to the situation Mr. Morris has found himself in.

Emma Jeffrey had to return the painting. To display it in a prominent position, say in the lobby next to Kevin Rudd’s sorry proclamation would be a reminder of a proud history that her syllabus does not recognise.

It is more about teaching them what to think.

I see this in my own daughter with some of the things she brings home from school. One of my favourites is still the one about “Japanese people are evil because they kill and eat whales,” closely followed by “white people are mean to black people.”

Neither of these statements are anything she should be covering at school. It doesn’t matter what subject the children are learning, the environment should be free of the political correctness that is so stifling our society.

Actions like Ms. Jeffery’s are completely explicable in a cultural marxist context, and unfortunately to be more anticipated.

To be considered also, however, is that actions like the demonstration Mr. Morris staged today, will likewise be more expected.

Less than half the people the Police Commissioner was told to expect turned up betweeen the appointed times at Gunnedah South Public School today, but more signatures were received then projected, at 26. Some people were too scared to be there on the day and would only presign before the event, and then some only with their initials or a pseudonym, and putting their address as simply Gunnedah.

Mr. Morris, I salute you.

You didn’t fit her narrative, but you sure fit mine.

One Reply to “History Be Damned In Our Schools.”