From The Scottish Sun: h/t Snaphanen 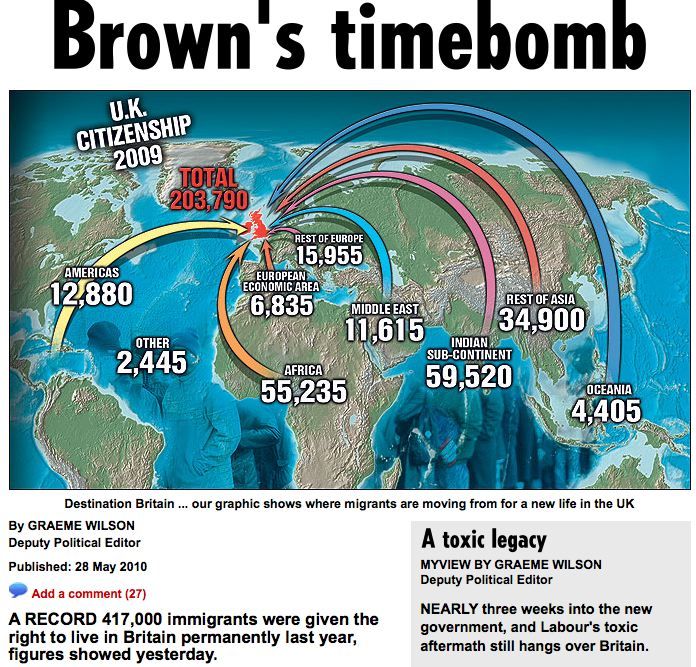 A RECORD 417,000 immigrants were given the right to live in Britain permanently last year, figures showed yesterday.

Of those, 203,000 were handed a British passport and full citizenship in 2009 – around one person every three minutes.

On the rise … migrant numbers soared under Labour

Another 214,000 were given the right to settle in the UK – the first step to full citizenship.

This figure soared by 40 per cent over the 12 months.

The Home Office figures showed 29 per cent of those given a passport last year were from India, Pakistan or Bangladesh. Another 27 per cent came from Africa and 17 per cent from Asia, including China and the Philippines.

Last year’s total was the highest since the figures were first published in 1962.

Mr Green said: “What is significant is that grants of settlement, the right to remain in this country, and grants of British citizenship have gone up hugely to record levels.

“So it shows the long-term effect of the fact that the immigration system was out of control for so long under the previous government.

“I believe immigration has been far too high in recent years, which is why we will reduce net migration back down to the levels of the 1990s – to tens of thousands rather than hundreds of thousands.”

But the Home Office statistics also showed the number of new arrivals dipped last year as the UK was clobbered by the recession. Just over half a million immigrants came – a drop of nine per cent. This included 45,000 from Eastern European countries like Poland, down 55 per cent.

David Cameron has vowed to cut this figure to “tens of thousands” by imposing a cap on immigrants from outside the EU.

And Mr Green promised new limits on work permits and a crackdown on marriage and foreign students. Campaign group Migrationwatch said the citizenship and rights of settlement increases were worrying.

Chairman Sir Andrew Green said: “These massive increases are the legacy of 12 years in which Labour has lost control of immigration.

“It leaves a huge task for the new Government but it is a task that must be achieved if the public’s concerns are to be met.” Other figures predicted that England’s population will soar by nearly four million in the decade from 2008 to 2018 – with Colchester, Essex, the fastest-growing area.

Garrison town Colchester will see its population rise by 33,000 to 207,000 – an increase of nearly 20 per cent. Westminster in London, Bristol and Norwich will all see their populations rocket by more than 16 per cent, according to a report by the Office for National Statistics.

The East of England will be the country’s fastest-growing region, with nearly 600,000 more people – a ten per cent increase.

It is also the region which has seen some of the biggest influx of immigrants over the last decade.

In contrast, the smallest rise will be 3.5 per cent in the North West.

The Office for National Statistics said the increases are being driven by migration as well as rising birth rates and people living longer.

8 Replies to “Gordon Brown’s legacy. The utter extinction of anything like England”