News of a ‘chemical spill’ in Aylesbury has been circulating around the Internet.  I am not sure about how many chemical plants are located in proximity to the railway station but the media is reporting that there was a chemical spill there yesterday.  What makes this ‘spill’ newsworthy is that it occurred on the same day and place as a controversial demonstration by the English Defence League (EDL) who spend their time standing up against Islamic extremism and sharia law.  The activities of the EDL may therefore be of concern to Islamic fundamentalist types who are willing to resort to acts of terror to silence those who do not subscribe to the letter of their religious principles.  So was this a simple chemical spill or was it in fact a botched act of terrorism against the EDL and those who are concerned about the way sharia is destroying true freedom in Great Britain?

The media seems to have a propensity to cover up anything that could put elements of the Muslim community in a bad light.  Our Government is fond of responding to acts of terrorism by pumping vast sums of money into the Muslim community as a kind of tribute to the communities of those who are willing to resort to the most shocking and despicable tactics to promote and strengthen their cause.  So can we truly believe reports that this was just a ‘chemical spill’ without any further explanation?

There are people who may think that this ‘spill’ is the result of a botched attempt to attack the EDL which, due to the presence of an inept and irresponsible Government is the actual last line of defence against Islamic fundamentalism in Great Britain.  If the EDL was ‘knocked out’ of the struggle then perhaps the terrorists think they would have a free hand to manipulate our appeasement minded political leaders who fawn over Islamists and thereby secure a clear road to make sharia law the law of the land in Great Britain.

It is very unfortunate that ordinary people have cause to be concerned about the partiality of journalists in this supposedly democratic and free country.  There are certainly journalists out there who need to do some serious research about Islamic theology, Islamic history, and the life of the so-called Islamic prophet Mohammed.  Inevitably their biases and prejudices may prevent them from undertaking this basic duty of impartial journalism in this field.  I read something that was supposedly an eye-witness account from Aylesbury that claimed to have seen something suspicious, the following is their account:

When i arrived at aylesbury train station for the demo,I like most people got searched.While i was being searched an asian looking man got searched leaving the staion,He had a bag full of bottles with different colour liquids (that were leaking) and a bag of strange colour powder.The police on seeing these items seemed to s**t themselves and backed off.I moved off the demo at that point. When i got there i was chatting to a bloke who also see this and he said the bloke with the chemicals got nicked,and there were whispers amongst the police about bomb materials and they have closed the station.
After the demo i headed back to the station and saw men in full Bio-Hazard suits cleaning up where the chemicals had spilt.I asked a copper what had happened and he said”you dont want to know”.

Make up your own mind in the absence of any further comment from the police or the media.  When the media is believed to be distorting the truth then people let their own imaginations run riot.  In my opinion though the police need to issue a statement that reveals the source of this ‘chemical’ that has caused all this concern and thereby put all our minds at rest one way or the other.  It is vital that our Government and public bodies are fully open with the people of this country and do not sacrifice the truth to political expediency.

In case it is removed, here is a screen cap of the article about the ‘spill’ 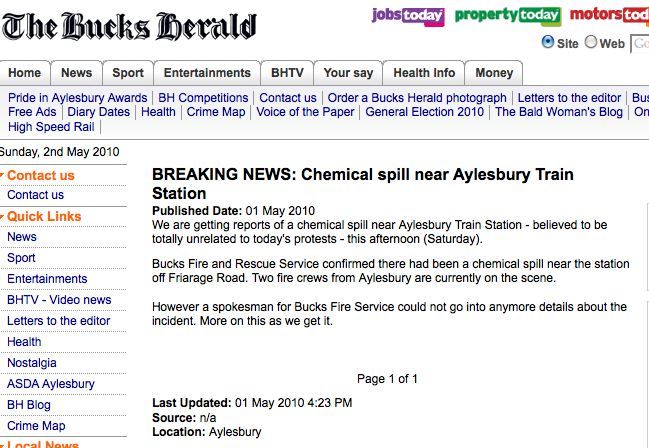 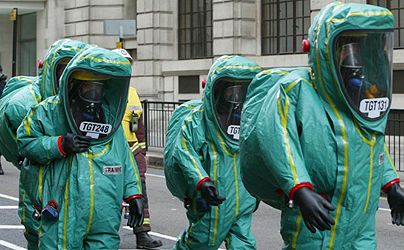 One Reply to “Was EDL Aylesbury a Target Of Islamic Terrorism?”