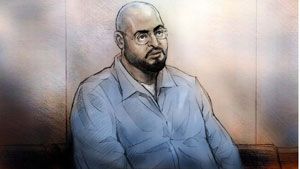 CBCNEWS… A 34-year-old man accused of being one of the conspirators in the “Toronto 18” terrorist bomb plot pleaded not guilty Monday as his trial began.

Shareef Abdelhaleem, a computer engineer, is charged with participating in a terrorist group and intending to cause an explosion. He is being tried by a judge, without a jury in a Brampton, Ont., courtroom.

Abdelhaleem and 17 others were arrested in 2006 and accused of plotting to detonate bombs at several targets in Ontario, including the CN Tower, the Toronto Stock Exchange and the office of the Canadian Security Intelligence Service, or CSIS.

Of those 18 people, five had their charges dropped or stayed, four pleaded guilty, one was found guilty and five are still awaiting trial.

The Crown alleged Abdelhaleem tried to buy ingredients to make explosives and exchanged cash with police informant Shaher Elsohemy as a down payment for ammonium nitrate, a fertilizer that can be used to make explosives.

Elsohemy, who was paid $4 million by the RCMP to work under cover, testified Monday that he had been friends with Abdelhaleem and that the two had gone on holiday together in Morocco before he become an informant.

Elsohemy also testified that Zakaria Amara, a man considered to be a leader of the group, revealed at an April 2006 meeting his plans to set off three truck bombs.

Prosecutors played three audiotapes of a conversation involving Abdelhaleem and others in the group that was obtained by investigators at a bugged gas bar.

On the tapes, they discuss separating from the larger group. Abdelhaleem talked about how to break away as gently as possible.

The group also discussed concerns that their phone conversations might be being bugged by CSIS, and someone on the tape suggested they could give false information to lead the spy agency astray.

The Crown claims that Abdelhaleem wanted to blow up the Toronto Stock Exchange “to affect the economy, to make it lose half a trillion dollars,” according to the Globe and Mail.

But William Naylor, Abdelhaleem’s lawyer, told the Globe and Mail his client is not guilty and he was entrapped by police.