Now if I understand this right, and keep in mind I do not speak one word of German: 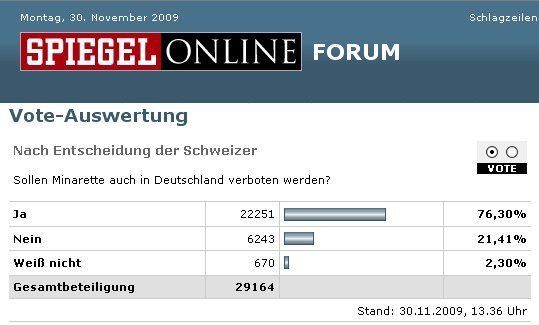 It kinda looks a little like Germans given the chance would back a ban on minarets as well. All accounts are, France would and probably most of Europe except maybe Kosovo and Dagestan. In fact it looks like Germans would be more adamant than even the Swiss. Kinda makes me think the Swiss referendum results might have been watered down a bit.

This would appear to be from France. Now I don’t speak French either but….

Spain may have a different opinion. After all, Spain remembers how great things where as the BBC tells us, when Spain was under Islamic rule. It was after all the golden age of Spain so how could they want a ban on minarets….

Woops. Stupid Spaniards don’t know when they had it good I guess.

Below, a screen shot from a Swedish paper courtesy of Snaphanan:

If I read this right it would appear that the Swedes may have had enough Islam for one century by a factor of about 9:1

H/T AA with thanks.