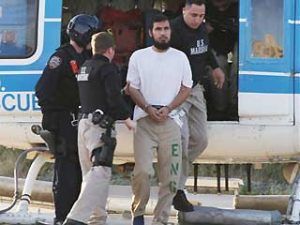 FOXNEWS…Members of the New York City Muslim community suggested Saturday they were being unfairly targeted in a terror plot probe, as a friend of the probe’s prime suspect said the scrutiny has put his “life on hold.”
Several people speaking Saturday afternoon at a news conference cautioned authorities against profiling Muslims in their probe of an alleged bomb plot with links to Al Qaeda.
The suspect, Najibullah Zazi, an Afghan immigrant who worked in Denver and New York City, is being held without bond in New York. The friend, Naiz Khan, befriended Zazi 10 years ago at a mosque.
Kahn let Zazi stay with him in New York City in the days leading up to what investigators say was a failed attempt last month to bomb sites as the city marked eight years since the Al Qaeda attacks of Sept. 11, 2001. Kahn now is under 24-hour FBI surveillance.
“We are so, so nervous,” Khan told reporters at the news conference, organized by the nonprofit group DRUM in Queens, N.Y. “My life has been affected by this. I have no job. … I have put my life on hold.”
DRUM, which stands for Desis Rising Up and Moving, describes itself as a group representing South Asian immigrants of various generations in New York City.
DRUM, which stands for Desis Rising Up and Moving. Does this not have a ring of militancy to it?
Its executive director said that a wave of fear has gripped the Queens community since raids of several apartments and businesses were executed there last month as part of the investigation into the suspected bomb plot.
“People should not be profiled or characterized as terrorists because of religion,” Monami Maulik told reporters Saturday afternoon.
The fact that it is Muslims again and again who plot these attacks should have no influence on who is investigated. The fact that Islam calls for militant Jihad against the Infidel should be ignored at the peril of Americans in the interest of community cohesion.
However, prosecutors say they have evidence that Zazi and others — regardless of their religion –trained with Al Qaeda in Pakistan. Investigators still are hunting for additional players and expect to make more arrests. Officials say Zazi’s suspected accomplices are under surveillance and are no longer a threat because the plot was thoroughly disrupted
Zazi, 24, has pleaded not guilty to a charge of conspiring to detonate homemade explosives in the United States, and on Friday, Zazi’s father pleaded not guilty to a charge of lying to investigators.
Federal investigators have questioned two men whose photographs were shown to a Muslim religious leader along with a picture of Zazi. Adis Medunjanin, a 24-year-old Bosnian immigrant, reportedly met voluntarily with investigators for 14 hours, and Zarein Ahmedzay, a 24-year-old New York City cab driver, also was interviewed by the FBI.
Both men’s photos were among four shown to Ahmad Wais Afzali, an imam at a Queens mosque accused of tipping off Najibullah Zazi that New York Police Department detectives were searching for him.
Naiz Kahn has said he also has been questioned by the FBI, though his photo reportedly was not among those shown to the imam.
Zazi, who left New York earlier this year to take a job driving an airport shuttle in Denver, is the only person charged in an international terror investigation described by Attorney General Eric Holder as one of the most significant plots uncovered in this country since 9/11. Zazi, who’s being held without bond, has pleaded not guilty to conspiring to use weapons of mass destruction.
Prosecutors have said Zazi and others they have not identified received explosives training at an Al Qaeda camp in Pakistan. U.S. intelligence and senior administration officials have said they became aware of Zazi’s connection to a possible plot in late August. They said he was recruited and trained by Al Qaeda, and he had contact with a senior Al-Qaeda operative.