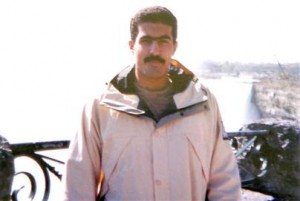 Mohammed Mansour Jabarah, of St. Catharine’s, Ont. in a photo was taken at Niagara Falls in April, 2002, just before he went to the U.S. to cooperate with the FBI.

A Canadian serving a life sentence in the United States for terrorism is being force-fed through the nose after going on a hunger strike, his lawyer said on Tuesday.

Mohammed Mansour Jabarah has refused to eat since mid-April and prison officials are allegedly pumping food into his stomach using a tube inserted in his nose.

The convicted al-Qaeda terrorist is protesting restrictions on his mail, his lawyer said, but his father said Jabarah and other Muslim inmates also want to pray together.

The U.S. Bureau of Prisons declined to comment for privacy reasons. Prison officials can intervene when a hunger striker’s life is at risk but the force-feeding of inmates is controversial.

“They shove a tube up your nose down into your throat,” said Kenneth Paul, the lawyer who represented Jabarah at his trial in New York. “It’s like torture.”

He said the prison officials begin force-feeding once an inmate has lost a certain percentage of body weight. The feeding is done by a physician or a physicians’ aide, he said.

Jabarah, 27, immigrated to Canada from Kuwait as a boy. After graduating from high school in St. Catharines, Ont., in 2000, he travelled to Afghanistan, where he trained at Osama bin Laden’s camps.

He was one of a small core of dedicated terrorists who formally joined al-Qaeda by swearing an oath to bin Laden. In 2001, Bin Laden sent Jabarah to Khalid Sheikh Mohamed, the architect of the 9/11 attacks, who gave him additional training in Pakistan and tasked him to bomb the American and Israeli embassies in Singapore.

Before the attack could be executed, Jabarah was arrested in Oman and brought back to Ontario by Canadian Security Intelligence Service officers. He later surrendered voluntarily to U.S. officials and pleaded guilty to charges in New York.

In 2007, the Security Intelligence Review Committee scolded CSIS for violating Jabarah’s rights by arbitrarily detaining him and helping transfer him into U.S. custody without consulting a defence lawyer.

U.S. prosecutors argued he was irredeemably devoted to the cause of bin Laden. As proof they cited a letter in which he wrote, “And if they release me, then I will kill until I am killed.”

A sentencing memorandum claimed that while feigning cooperation with investigators, Jabarah had plotted to kill the FBI agents and prosecutors working on his case, stashing away steak knives and nylon rope as well as bomb plans.

He was sentenced to life imprisonment last January. His appeal was dismissed. He is serving his sentence at one of the country’s most secure prisons, 145 kilometres south of Denver.

Last March, Jabarah filed a complained against U.S. justice and prison officials, blaming them for his depression and other health problems. In the complaint, he accused officials of withholding family mail, including a Koran, for up to 41 months.

“I know that he was objecting to mail restrictions,” Mr. Paul said. “He was not getting his mail, his mail was not going out, it would take forever to get mail that was mailed to him many, many, many months earlier.

“I think that that’s the basis for the hunger strike and I don’t know if it’s limited to just mail. I think there are several issues that are being violated by the Bureau of Prisons,” he said. Canadian consular officials are aware of the hunger strike, he added.

His father Mansour Jabarah, who now lives in Kuwait City, said in an e-mail that his son wanted to be able to phone his family and attend group prayers. “He and the other Muslims in his section would like to be able to pray together, especially Friday prayer.”