Pakistanis turn backs on ‘erring’ Taliban From The BBC: 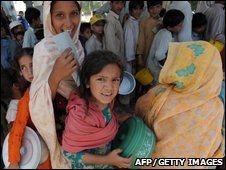 As the fighting between the Taliban militants and Pakistani army becomes a war for the soul of Pakistan, Hanif Mohammed thinks the Taliban may have already lost one crucial battle.

On the 11th day of every Islamic month, my next-door neighbours in Karachi set up a sound system in the evening and start singing songs of devotion.

The house belongs to a banker who is also a minor spiritual leader of the Gilani sect, which originated in Iraq.

Their evening usually begins with hymns for the Prophet Muhammad, set to Bollywood’s hit tunes.

Sometimes I observe them from my roof top.

They are all middle-aged men, and most sport flowing beards.

The long line of cars parked outside the house suggests that they have a preference for the latest, flashy models.

The finale of their spiritual evening is usually a rousing chorus where everyone joins in.

The chant is difficult to translate, but it expresses their collective desire to get teleported to the holy city of Baghdad.

“Karachi has its share of problems,” a guest staying with us and listening to this chorus commented recently, “but surely I wouldn’t move to Baghdad. Don’t these people read the newspapers?”

Until recently, many thought the Taliban would lead the way to this promised land

My neighbours are not the only urban, middle class Pakistanis yearning for a return to an imaginary past in the Arab deserts – a puritanical utopia where they would live blessedly ever after.

Every day, in a thousand prayer and preaching sessions, the believers beg to be returned to Mecca and Madina.

And until recently, many thought that the Taliban would lead the way to this promised land.

Or at least create a replica at home.

For a long time the Taliban presented themselves as the lost link to a pure past, a conduit to a simple life and eternal salvation.

Only four weeks ago most Urdu television channels were acting as cheerleaders for the Taliban.

Most Urdu columnists in newspapers were presenting the Pakistani Taliban as the reincarnation of early Muslim warriors.

Now in a rare consensus they are all clamouring for an all-out war against them.

Even the people who were sitting on the fence – or considered the Taliban a localised problem – have suddenly realised that actually the Taliban are out to destroy their way of life.

Every single opinion poll carried out in Pakistan has concluded that the country is a hotbed of anti-Americanism.

But now, faced with a war against the Taliban, the nation seems to have united behind the most American of slogans: they are threatening our way of life.

How did we change our minds so quickly?

More than the government or the media, it is the Pakistani Taliban who are responsible.

This collective change of heart can be traced back to a two-minute flogging video that made headlines around the world.

Everyone knew that the Taliban flog and behead people, and when they want to show their softer side they just shoot them or slice off their ears. But nobody had seen them at work.

In this video men in regulation Taliban dress and beards are holding down a young girl and methodically whipping her.

The girl screams. She asks for forgiveness.

It is never clear what her crime is.

One of the men in the video tells the other one to hold down the girl firmly.

This series of images had more impact on the people’s psyche than a thousand theological debates raging on television.

For the first time a young girl’s screams silenced the Taliban cheerleaders.

Then the Taliban leaders, in a series of interviews, have been outlining their roadmap for the nation on television.

It was not just the Swat valley they wanted to purge of evils like schools, music, democracy, barbers and the judiciary.

If it was good for Swat, it should be good for the rest of the country.

And later they wanted to impose the same model on the rest of the world. They demanded that the government give them arms to carry out their mission.

It was a spectacular public relations disaster.

When the government finally launched a military operation in Swat, the same TV channels which had broadcast elaborate debates clarifying supposed misunderstandings about the Taliban went looking in their archives for war anthems to support the Pakistani troops.

I wonder if this change of heart is genuine or a knee-jerk reaction that dictates that we must support our troops because they are fighting to protect our way of life.

Many Urdu columnists still go to great lengths to explain that the Taliban came close to establishing a model Islamic state in Afghanistan – or that the Pakistani Taliban are not real Taliban, but Indian agents.

There is a set of gory pictures circulating on the internet claiming to support this argument.

The pictures show mutilated bodies of alleged Taliban, with their trousers pulled down to reveal their uncircumcised privates.

So they are clearly not Muslims, is the message.

And it is supposed to convince us that the Taliban are actually not a product of Pakistan’s dangerous drift towards religious violence but a conspiracy hatched against us by Indians, Israelis and, of course, Americans.

It is this thinking that needs to change before we can decide whether our way of life belongs in the here-and-now or somewhere in the suburbs of Mecca.

Only then we can do something to save that way of life.

How to listen to: From our own Correspondent