After seeing the great success other governments have had in appeasing militant Islam, this comes as a no-brainer for Somalia.  A state funeral for the recently deseased pirates is next I’m sure. 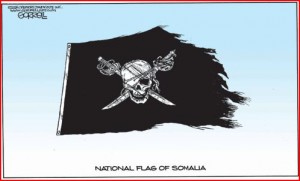 (CNN) — Somalia’s transitional federal parliament has unanimously backed the introduction of Islamic Sharia law in the country after a vote over the issue was brought to parliamentarians Saturday.

The vote will boost new President Sharif Ahmed’s efforts to defeat the hard-line Islamic group of Alshabab, which opposes his government.

Alshabab previously declared that it would continue fighting until Sharia law is imposed in Somalia.

“Calling us anti-Islamic lawmakers is now over,” said Osman Elmi Boqore, deputy speaker of the Somali parliament, after voting ended.

The parliament’s vote comes amid high tension in Mogadishu after the killings of key supporters of Ahmed’s government in recent days.

The new form of law would replace the traditional charter, which was not as strict as Sharia law.

The strict interpretation of Sharia forbids girls from attending school, requires veils for women and beards for men, and bans music and television.